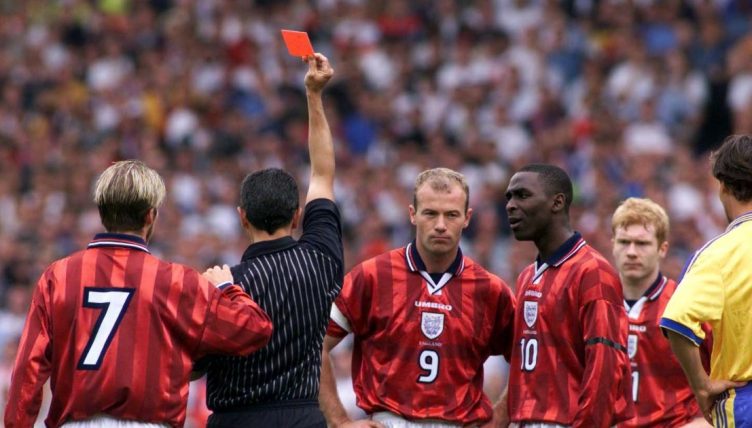 On June 5, 1999, Manchester United legend Paul Scholes became the first England player to ever be sent off at Wembley.

Harry Maguire, against Denmark in October 2020, and Steven Gerrard, against Ukraine in September 2012, have since been shown red cards at the famous London stadium – but Scholes was the only Three Lions representative to ever be dismissed at the old one.

In one sense, it’s pretty remarkable that no England player was sent off in the first 75 years of playing matches at Wembley, but then again when you see what players used to get away with it makes a degree of sense.

Even in 1999, Scholes committed a wild lunge after just 65 seconds against Sweden in a Euro 2000 qualifier, which by today’s standards is an inarguable red card offence.

But he wasn’t even booked for it – the midfielder eventually received his first yellow for a late tackle on Stefan Schwarz in the 27th minute, and received his marching orders for another questionable tackle on the same player early in the second half.

Scholes himself refuted the widely-held idea that he couldn’t tackle: “Of course I can tackle,” he told 5Live in 2011. “There’s plenty of evidence of me being able to tackle. I was just getting people back.

Something must have happened in the opening minute, then.

#OnThisDay in 1999 Paul Scholes became the first and only England player to be sent off at the old Wembley.

This tackle – in the first minute – wasn’t even the one he was shown red for. pic.twitter.com/vaud0K8CrV

Paul Scholes the first England player sent off at Wembley.