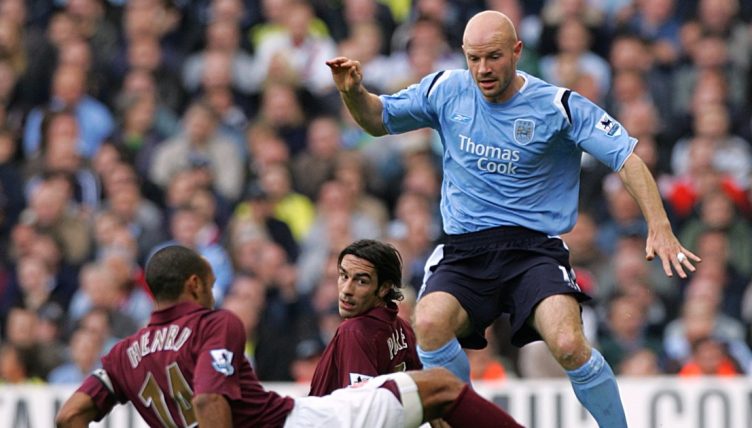 Thirteen years have passed since Danny Mills retired from football, and we’re approaching two decades since Arsenal hit their Invincible peak, but there remains no love lost.

Former England right-back Mills turned out 13 times against the Gunners between 1998 and 2006. He actually had a reasonable record against them, considering Arsene Wenger led them to three Premier League titles in that period.

Across his time with Charlton, Leeds, Middlesbrough and Manchester City, Mills was on the winning side on five occasions against Arsenal, while he lost to them seven times.

He was in the Leeds line-up as they won at Highbury in back-to-back seasons between 2001 and 2003, and was part of the Middlesbrough side that beat Wenger’s Invincibles home and away in the League Cup semi-finals in 2004.

The most famous incident between Mills and Henry occurred in 2005 when Mills was playing for Manchester City. Henry and Robert Pires combined for a notoriously poor penalty routine, in which one passed to the other, and they messed it up completely.

Mills was straight over to celebrate that their cheeky plan didn’t quite work out as planned.

“I think it’s the arrogance of trying it. If it goes well, fair enough,” the former England right-back reminisced in an interview with talkSPORT. “But, if you try something that audacious and get it that wrong – it was a complete mess up. It was awful – it was terrible!

“Robert Pires rode his studs across the top of the ball and the ball moved, they knew it shouldn’t be retaken at the time.

But Mills certainly didn’t always have things his own way, and had some games to forget against the likes of Thierry Henry – something Arsenal fans on social media were keen to remind him after he recently accused Gunners hero Robert Pires of being “the first player to bring serious diving to England”.

There’s one particular clip of Henry producing a ridiculously cheeky chipped pass over Mills’ head from just a couple of yards away, during the latter’s late-career stint at City. It’s not one the pundit will want to watch again.

pic.twitter.com/vYeRz6A3f4 Danny Mills is still bitter we used to bully him on the pitch https://t.co/IXcNdHAVL4

READ NEXT: A tribute to Thierry Henry, a man who scored more goals and better goals