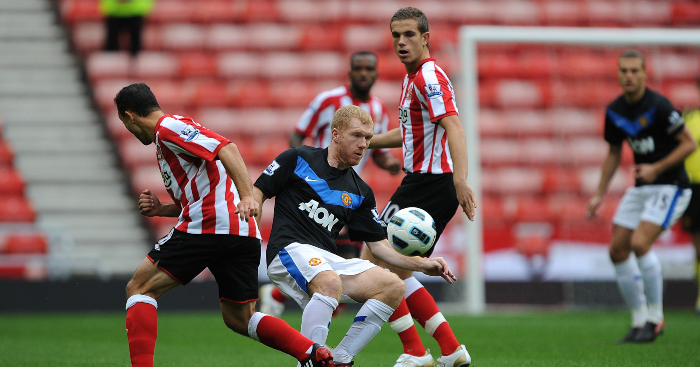 As the man to take over from Steven Gerrard as captain and lift the Premier League and Champions League titles, Jordan Henderson has cemented his place as a Liverpool hero.

Reds fans can no doubt reel off plenty of reasons why they love Henderson – hopefully without mentioning the word ‘neighbourly’.

However, we’ve found something Liverpool fans could enjoy before Henderson even made his move to the club.
We’re going back to 2010, when a 19-year-old Henderson was still plying his trade for Sunderland against Liverpool’s fierce rivals Manchester United at the Stadium of Light.

The Black Cats may have lost due to a Nani goal, but, more importantly, the teenager in Sunderland’s midfield confidently strolled up to Paul Scholes and subjected him to a nutmeg of such high class we found ourselves making a chef’s kiss gesture without even meaning to.

“You always knew he had the dedication. When we were at Sunderland he was a young kid then, maybe 18,” former Sunderland team-mate Darren Bent recently reminisced in an interview with talkSPORT.

“There had been a lot of talk about him, he’d been linked to everyone, but he got his head down, worked hard and set a good example.

“We knew he had that determination and passion. I always knew he would succeed.

“What you didn’t want to happen when he left for Liverpool was for people to compare him to Steven Gerrard.

“Steven Gerrard is a great of the Premier League and they are two completely different players. I wanted people to judge him in his own rights.

“Now people realise how good and important he has been to Liverpool.”

United fans will often debate Scholes’ place among the best midfielders in Premier League history, but in this moment he was left looking like a kid who had just been embarrassed in front of all his mates in the playground.

Liverpool fans likely will have been laughing at the time, unaware that the youngster who pulled it off would bring them far greater joy in the future.

READ NEXT: Revisiting the Liverpool team from Jordan Henderson’s debut in 2011