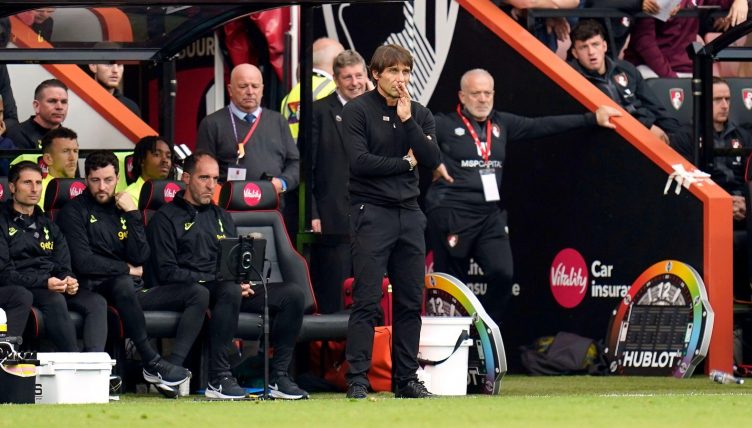 Tottenham manager Antonio Conte is not known for being reserved.

The Italian coach has passionately celebrated many a goal, with some particularly animated touchline antics during his time at Spurs.

That exuberance has resulted in him being sent off against Chelsea after a spat with Thomas Tuchel earlier in the season, while in midweek he was visibly raging at a contentious VAR decision to disallow a late winner against Sporting Lisbon in midweek.

Perhaps he had VAR in mind on Saturday when he gave an uncharacteristically muted reaction to Rodrigo Bentancur’s injury-time match-winner away to Bournemouth.

Tottenham had battled back from two goals behind against the Cherries and completed their comeback in the dying minutes, but you wouldn’t have known they took three points in dramatic fashion if you look at the way Conte responded.

When the ball went in the back of the net, the 53-year-old almost look frustrated amid the pandemonium of the coaches and substitutes celebrating around him. He simply turned around, stuck his hand inside his pocket and sauntered casually down the tunnel and back to the dressing room.

But in his post-match interview with Sky Sports, Conte struck an altogether more optimistic tone – although he did fire a warning shot for his players to be sharper in their upcoming crunch match in Marseille in midweek.

“It was vital to win this game, because in the last two Premier League games we’ve got zero points, and for us, it was very important to win. On Tuesday, we’re going to play an important game [vs Marseille] with passion, and this type of win can help us to have more confidence and to trust ourselves,” he said.

“We were two-nil down and I think we showed great character, and at the same time, we need to improve the quality in our play, our passes, and to attack with nastiness. I think we were a bit soft in the first half and we conceded the first goal.

“For the second goal, we could’ve avoided this type of situation, but it was a good reaction from the players. Sometimes they lose confidence, they don’t believe in themselves and we need to fight in every game.”

READ NEXT: The Premier League table over the course of Antonio Conte’s first 38 games as Spurs boss