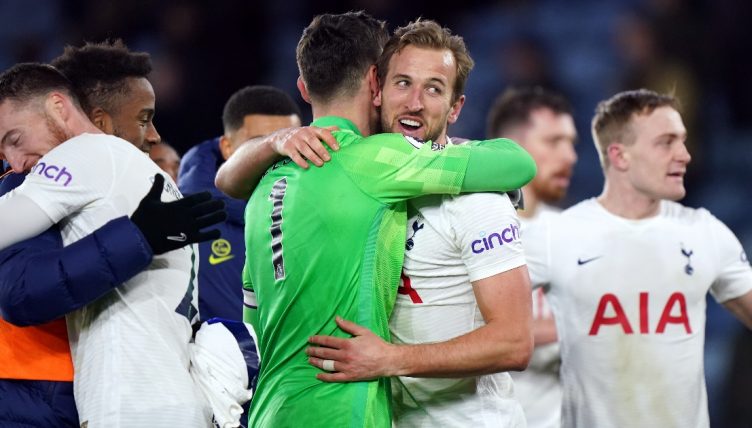 Tottenham captain Hugo Lloris ran the length of the pitch to celebrate with his team-mates after they produced one of the most dramatic comeback wins in Premier League history.

Leicester City were leading 2-1 as the clock ticked into a fifth minute of injury-time, only for late substitute Steven Bergwijn to score twice in three minutes to turn the game around and ensure the three points went back to north London.

Bergwijn produced a composed finish for the match-winner in the dying seconds, completing the latest comeback win in Premier League history and sparking scenes of pandemonium in the away end.

Lloris evidently didn’t want to miss out on the fun as the Spurs players celebrated in a huddle together with the travelling fans. The goalkeeper absolutely pelted it straight up from one end of the King Power to the other to get involved.

“I think it was an amazing game,” Spurs boss Antonio Conte told reporters after the match.

“To arrive in added time losing 2-1 was honestly a great, great disappointment. At the end, my players showed great resilience, great desire. Don’t give up. This must be our philosophy, don’t give up and fight until the end.

“They showed me great desire. When we had equalised, we got the ball and we wanted to restart the game and to try to win. I think it was good for me to see this type of attitude from my players.”

The future remains uncertain for Lloris, who is out of contract at Tottenham this summer.

But on this evidence, he remains emotionally invested in the cause, while suggestions in the media are that the World Cup winner will sign a contract extension in the coming weeks.