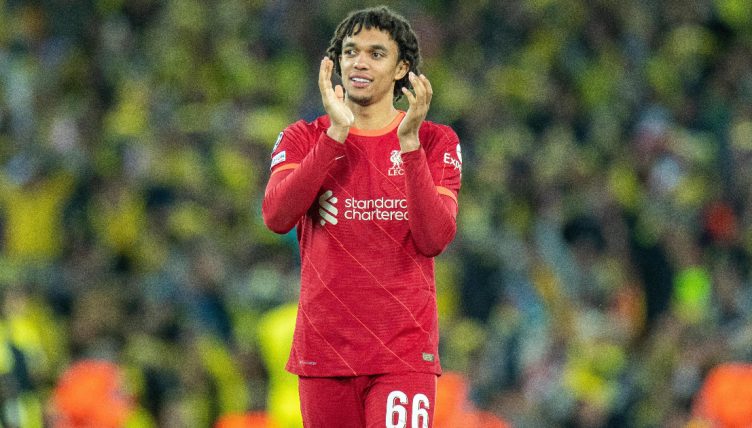 Liverpool made it difficult but secured all three points away at Newcastle in a crucial game for the Premier League title race – and they could see the funny side as their captain Jordan Henderson sent a first-half free-kick into row Z.

Right-back Trent Alexander-Arnold, who normally takes Liverpool’s direct free-kicks was on the bench, and he couldn’t help but laugh at his teammate’s attempt which prompted jeers from the Newcastle fans.

Liverpool rotated for this game with the second leg of the Champions League semi-final against Villarreal in mind, and took the lead through Naby Keita in the first half.

The visitors were awarded a free-kick at the edge of the box in the first half and in the absence of Alexander-Arnold, their skipper stepped up to take it.

Henderson comically sent the ball well over the bar, and Alexander-Arnold then laughed alongside his teammates Caiomhin Kelleher and Ibrahima Konate on the bench at the effort.

The full-back has scored five direct free-kicks in his career compared to Henderson’s two, so is qualified enough to judge his teammate’s efforts, and after picking up the victory, Henderson will hardly care.

Alexander-Arnold looks back to his best after a disappointing campaign last year, which also saw him lose his England place for Euro 2020.

He has his critics, who point out that his attacking abilities far outweigh his defensive ones, but Jurgen Klopp outright refuses this as a claim.

“Trent did exceptionally well against Gabriel Martinelli,” Klopp stated after Liverpool’s win over Arsenal in March.

“If anybody tells me Trent can’t defend, I’ll knock them down. I don’t know what the boy has to do anymore.”

The 23-year-old has been sensational since arriving in the Liverpool team as a teenager from the academy, and now has a remarkable 61 assists in 220 games for the club.

He’s put pressure on himself now though, as Henderson will intensely watch his next free-kick to see if his laughter was justified.