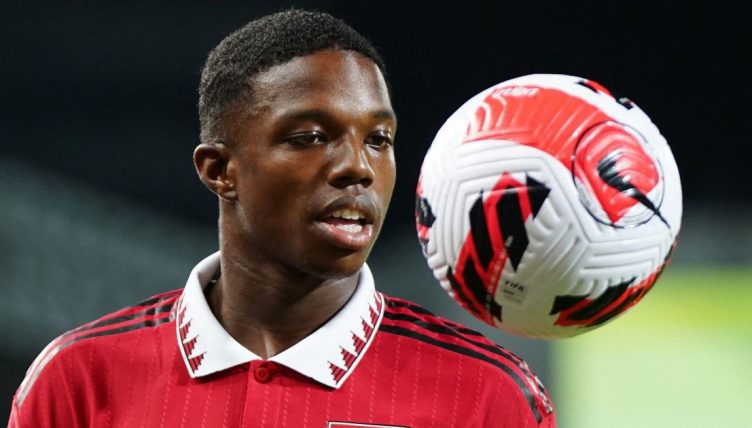 Manchester United‘s new manager Erik ten Hag may have lost his unbeaten pre-season record in the friendly against Atletico Madrid on Saturday, but he’d have loved a brilliant pass produced by new signing Tyrell Malacia.

Malacia, 22, joined United from Feyenoord on 5 July for an initial fee of £13million with potential add-ons.

The left-back shone in the Eredivisie last season and has already earned five caps for the Netherlands senior national team.

When Malacia signed, Ten Hag said: “He can also take part in the offensive side of our game, and he can do that really well.

“I think he will really contribute to the team.”

In an interview with Sky Sports, the player was asked whether Ten Hag will encourage him to tuck in as an extra midfielder when United have the ball.

“Yeah, that’s what the coach wants from me,” Malacia replied. “And at my former club, I played the same style so for me it’s easier to fit into this system.”

Malacia showed why Ten Hag is so keen for him to join the creative phase of United’s play in the friendly on Saturday.

United lost 1-0 to a Joao Felix goal, with Fred also getting sent off for a stupid foul, but Malacia put in a fine performance and was singled out for praise by many fans on social media.

He linked up well with Marcus Rashford down the left and just under ten minutes in he showed off his passing range with a terrific curling ball to Anthony Martial.

Malacia received the ball in a left-sided defensive midfield position – tucked in, away from the touchline – and spotted United’s French forward bending his run in behind the Atletico backline.

The Dutch full-back then unleashed a delicious ball that curled around one Atletico man and into the path of Martial.

Martial managed to beat another defender before Reinildo came across to stop him from getting a shot away.

It may not have produced a goal this time, but Ten Hag would have been delighted with the vision of Malacia and running of Martial.

That ball from Malacia 😍 the confidence in Anthony Martial ❤️ pic.twitter.com/Dod2jcQBG9