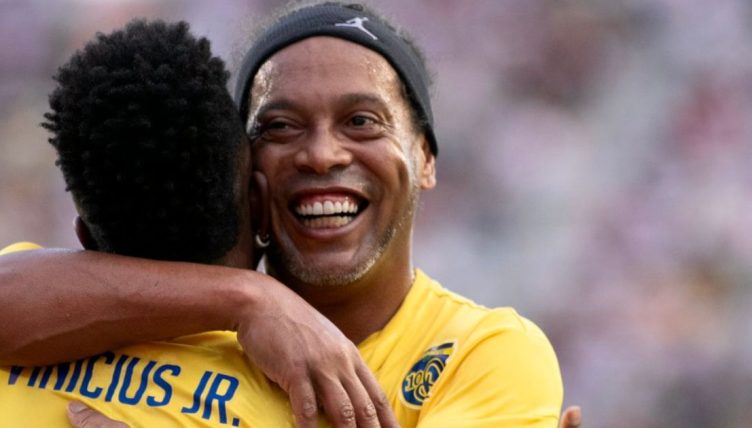 Vinicius Jr and Ronaldinho linked up beautifully for a goal in a celebrity match on Saturday night in Miami, before the young Real Madrid man paid tribute to former Barcelona star Ronaldinho by imitating his famous samba celebration.

The game had been set up between two teams led by Ronaldinho and his former Brazil international team-mate Roberto Carlos and featured legends like Cafu and Rivaldo as well as current stars like Vinicius and his Real Madrid colleague Eder Militao, Paul Pogba, Radamel Falcao and Paulo Dybala.

One of Roberto Carlos’ team’s goals came from the former NBA star Steve Nash, who nicked the ball off the toe of Pogba before firing home.

But our favourite moment of the game arrived early on as Vinicius Jr – who was so good that he was forced to swap sides at half-time – combined deliciously with Ronaldinho.

Receiving the ball on the left, Vinicius played it inside to his compatriot before making a beeline for the box.

Ronaldinho returned it to him and Vinicius did what he was doing all season in the white of Madrid, slotting it into the corner beyond the helpless goalkeeper.

Having Ronaldinho set you up for a goal is the dream of any young Brazilian footballer – and pretty much every other football fan, if we’re honest – and Vinicius repaid the favour in delightful style.

After finishing the chance, the 21-year-old paid homage to his more senior mate by performing the samba celebration we all loved watching so much when Ronaldinho was in his Barca pomp.

With the World Cup coming up later this year, Vinicius will be hoping this isn’t the last time he’s imitating Ronaldinho while wearing yellow in 2022.