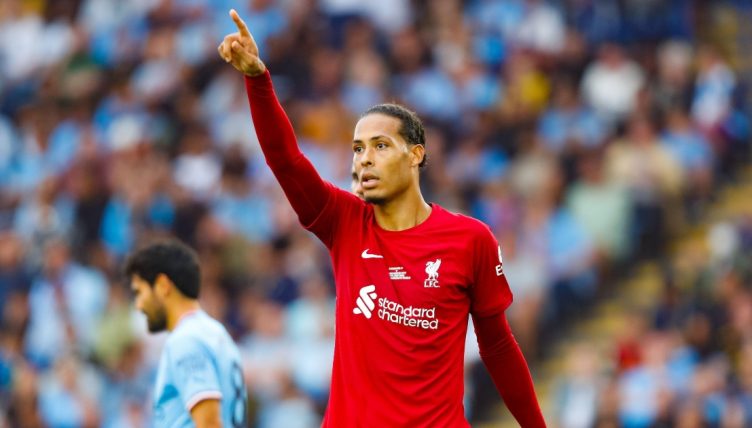 The build-up to the game had been dominated by anticipation for Van Dijk’s battle with Erling Haaland, who recently joined City in a £51million deal.

Haaland is regarded as one of the best strikers in the world but the Netherlands international came out on top at the King Power Stadium.

City’s No.9 was kept relatively quiet throughout the game and Trent Alexander-Arnold gave Liverpool the lead with a deflected first-half effort.

Julian Alvarez equalised midway through the second half but Liverpool were awarded a penalty following Ruben Dias’ handball in the 82nd minute. Mohamed Salah stepped up and restored Liverpool’s lead, firing his effort into the bottom corner.

After conceding the goal, City wanted to resume play as quickly as possible and one player tried to roll the ball back to the centre circle.

But Van Dijk, who was on his way over to Salah and the rest of his team-mates, decided to boot the ball high into the stands in an attempt to waste time.

Rodri attempted to confront the centre-back and Bernardo Silva was seen complaining to referee Craig Pawson. Despite their protestations, Van Dijk wasn’t shown a yellow card for the incident.

Darwin Nunez sealed the victory with a debut goal for Liverpool in injury time and Van Dijk has now won every domestic trophy during his time at Anfield.

“I liked the whole game,” Jurgen Klopp told Liverpool’s official website after the game. “We are that early [in the season], I like the problems we have in a game, especially when you win.

“I really like the problems because you have to work on that. I know we have to work. We said it before, we have to extend our pre-season at least for two more weeks. There’s no other chance.

“We cannot just now go in the normal rhythm, play games at the weekend that we are not prepared for. Then three games a week which we will have from, I don’t know exactly, from three or four weeks.

“So, it was for me a really nice watch. It is the most difficult opponent you could get. They don’t get worse, or whatever, they just strengthen and improve and develop and you see the squad, the boys they could bring on.”