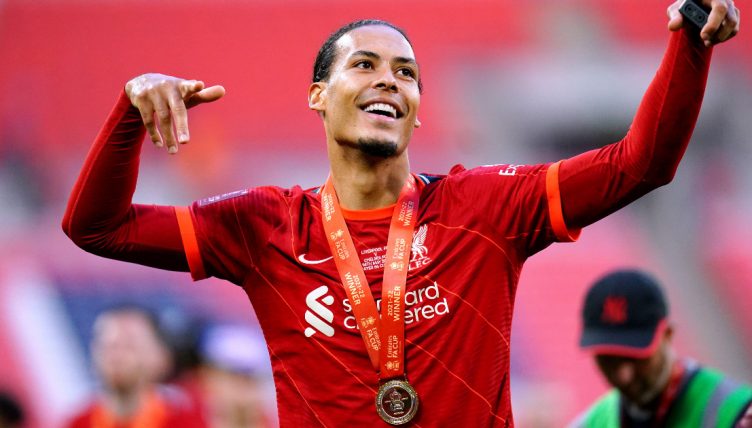 Virgil van Dijk has arguably been Liverpool’s most important player since he joined the club in 2018, and his team-mates are fully aware of what he brings to the side.

After Liverpool’s victory over Chelsea in the FA Cup, they decided to show their appreciation for him in the dressing room by singing his chant.

The 30-year-old centre back has been back to his best after missing most of last season with injury and was imperious yet again in the final as Liverpool shut out Chelsea before winning on penalties.

He’s now won six different trophies for the Reds and the Liverpool faithful have made their feelings towards him known with a chant about him.

Based on the tune from ‘Dirty Old Town’ by The Pogues, Liverpool’s stars sung his song as he danced around the dressing room holding the FA Cup.

“He’s a centre-half, he’s a number four,” they sang. “Watch him defend, and we watch him score.

The defender was withdrawn after 90 minutes in the final, and there were some fears that he had picked up an injury ahead of Liverpool’s Champions League final against Real Madrid.

But there is relief all around Merseyside as Van Dijk revealed that it was simply a precaution.

“Hopefully well, we’re going to check it out. I felt in the first half when I sprinted, I felt a twinge behind my knee, I played on,” Van Dijk stated after the game.

“In the end, I can’t risk it for the team and I need to trust Joel [Matip]. Hopefully it will be fine.”

If Liverpool are to go on and win the quadruple, they will need their star player fighting fit.