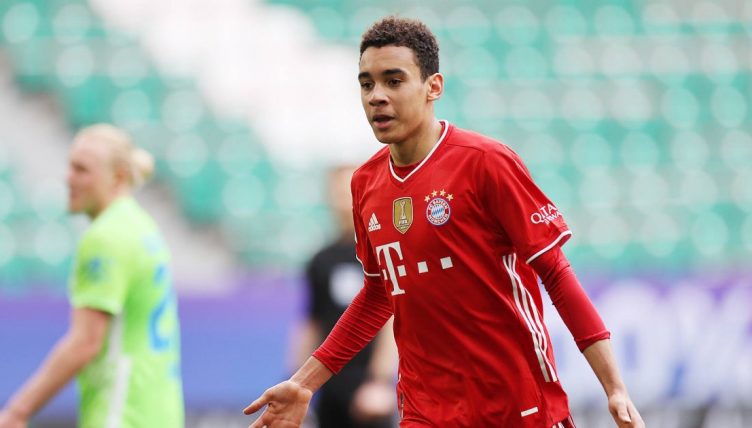 Musiala joined Bayern’s youth ranks from Chelsea’s academy in 2019 and has enjoyed an incredible breakthrough season in 2020-21.

He scored his first Bundesliga goal in an 8–0 win over Schalke in September 2020 and became Bayern’s youngest goalscorer, breaking the previous record of Roque Santa Cruz.

The 18-year-old made his 22nd league appearance of the season against Wolfsburg and broke the deadlock inside the opening 15 minutes.

Eric Maxim Choupo-Moting doubled their lead before Wout Weghorst pulled one back against the run of play in the 35th minute.

Bayern’s two-goal advantage was restored moments later when Musiala headed Thomas Muller’s cross into the back of the net.

Maximilian Philipp’s half-volley reduced the deficit again in the second half but Bayern held on and moved seven points clear at the top of the Bundesliga.

Jamal Musiala. Remember the name. This kid is special 😍 pic.twitter.com/CTeJEzigX6

How is Jamal Musiala this good already?

Two goals in a 3-2 win away to Wolfsburg, including this magnificent header 🤩

Bayern have another star on their hands… pic.twitter.com/wc2Fm2vmcn