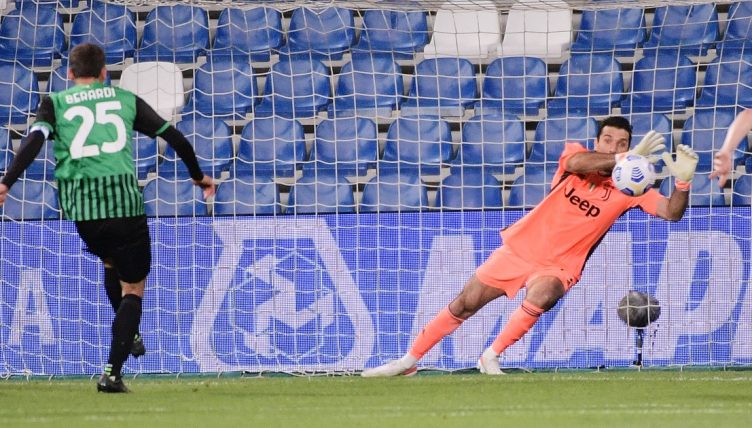 Gianluigi Buffon made a crucial penalty save as Juventus beat Sassuolo 3-1 to keep their hopes of Champions League qualification alive.

Juventus went into the match knowing that a victory was essential to keep up with the likes of Atalanta, Napoli and AC Milan above them.

But things weren’t going according to plan when Sassuolo were awarded an early penalty following Leonardo Bonucci’s trip on Giacomo Raspadori.

Knowing that their season lay in the balance, the 43-year-old goalkeeper showcased his agility by parrying Domenico Berardi’s spot-kick away.

Following their reprieve, Cristiano Ronaldo scored his 100th goal for Juventus which sandwiched strikes from Adrien Rabiot and Pablo Dybala.

After the game, Buffon told Sky Sports: “I’ve received some interesting offers, I want to see in 20 days if I will still have the enthusiasm and desire to work hard.

“If I still feel good, I’ll accept the offer. Otherwise, I will retire”.

The legendary goalkeeper's time at Juve may be coming to a close, but he's still making a major impact in a big game for the Bianconeri ⚫⚪ pic.twitter.com/t166tPNIuD