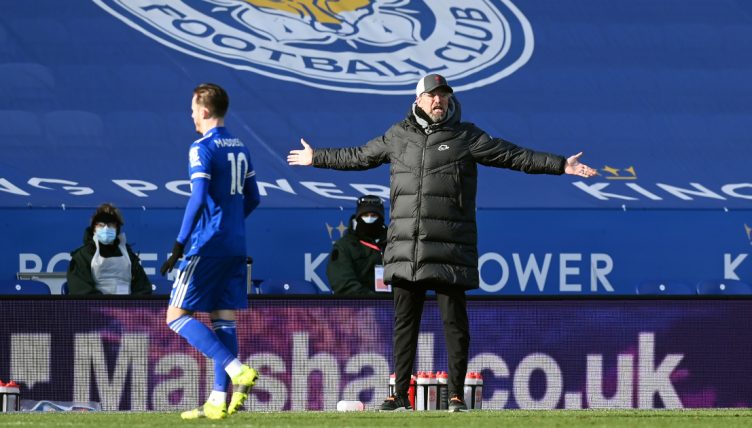 It was another day of disappointment for Liverpool as they lost 3-1 to Leicester City and Jurgen Klopp made a big admission in the aftermath.

With Manchester City in red-hot form of late and Liverpool continuously faltering, retaining the title has long looked out of their grasp but this was the first time we have heard Klopp admit it.

“So are you conceding the title then, Jurgen?” the Reds boss was asked in his post-match press conference.

“Yes,” he replied after a significant pause. “I can’t believe it, but yes.”

Mo Salah had given Liverpool the lead in the 67th minute with a calm but beautiful finish, only for two quick-fire goals from James Maddison and Jamie Vardy to turn the match on its head.

Harvey Barnes wrapped up the victory late on to solidify Leicester’s place in the top-four and leave Liverpool’s hanging in the balance.

It means their midweek clash with Red Bull Leipzig in the Champions League may take on much greater importance as they look to qualify for next season’s competition.

Jurgen Klopp concedes Liverpool will not retain the Premier League after today's defeat to Leicester 👀 pic.twitter.com/Qt9NX4WRc4

Watch: Liverpool’s Alisson and Ozan Kabak collide in a disastrous mix up