Watch: Ramsdale claims he was £17 richer from coins thrown at Leeds 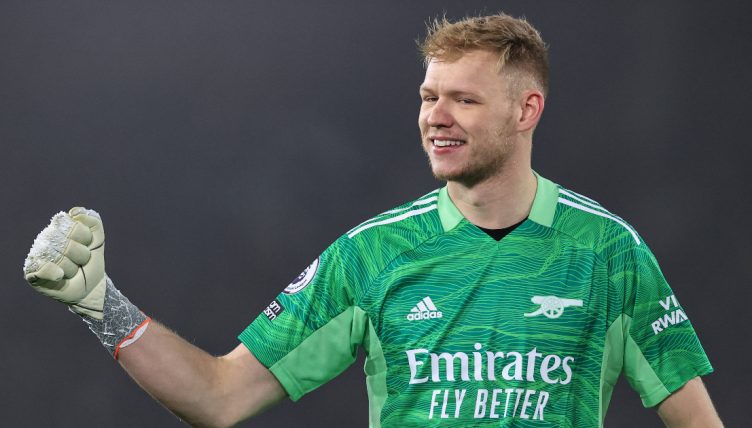 Aaron Ramsdale has been a revelation at Arsenal this season, for both his goalkeeping ability as well as his strong, likeable personality.

A lot of criticism was aimed towards the club after spending £23million on the goalkeeper from Sheffield United in the summer window, but they were silenced within weeks, and Ramsdale is now one of the most popular figures in North London.

The 23-year-old has nine clean sheets in his first 16 Premier League games for the club, and his superb shot-stopping and kicking ability have earned him the Arsenal number one spot for the foreseeable future.

The Englishman has also brought much needed character to the Arsenal dressing room, and often winds up rival fans and opposition players.

His performance in a 4-1 win away to Leeds United helped show the best of his character. Speaking to Ben Foster’s YouTube channel, Fozcast, he detailed the abuse he received from the home fans and how he laughed it off.

He received so much abuse from the fans during the pre-match warm-up that the staff had to give an announcement over the tannoy, which only seemed to encourage the fans, according to Ramsdale.

Throughout the game objects were launched towards him, which he put to the side, but was shocked at the amount of money aimed in his direction from the Leeds faithful.

“I’m looking around and there’s one two quid, well I collect two quids, so I took that!”

“There were loads of quids and 50p’s, so I’m picking them up and putting them by my towel. At half time I put them in my towel and run off!”

Speaking to Leeds midfielder and England teammate Kalvin Phillips after the game, Ramsdale told him “your fans must be loaded, it was about £17 I picked up!”

Ramsdale’s sh*thousery has become one of the most enjoyable things about watching Arsenal this season, and there’s surely plenty more to come.

Aaron Ramsdale on abuse from Leeds fans: “After the first [goal], there was bottles, lighters – next thing you know, money started coming! I collect £2s so I took that! I’m picking them up & put them by my towel. There was about £17 I pulled off the pitch!” [Fozcast YouTube] #afc pic.twitter.com/xyRQ1wkFBj