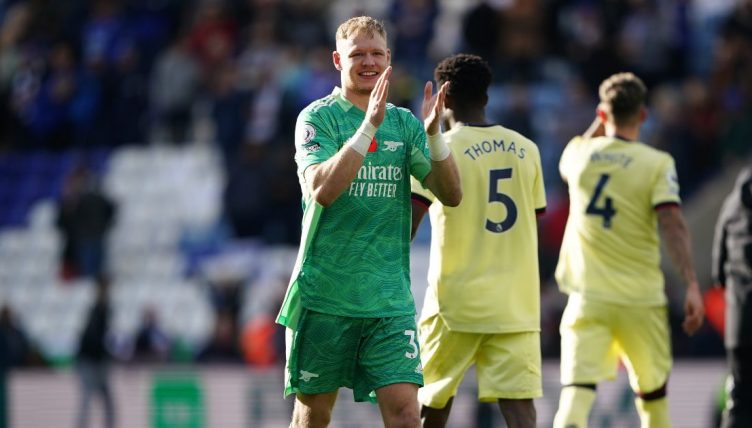 Arsenal goalkeeper Aaron Ramsdale got his own back on a section of Leicester fans in comical fashion following the final whistle of the sides’ Premier League match this Saturday after receiving a large amount of stick from the home supporters throughout the game.

Ramsdale, who enjoyed a superb game as the Gunners ran out 2-0 victors at the King Power Stadium, was spotted approaching a group of Foxes fans behind the goal his side were defending in the second half, banging on the Arsenal badge on his chest and then bowing as a chorus of boos rang out around him.

Throughout the match, there was a notable level of verbals being thrown towards the former Sheffield United man from the home fans.

The moment after the end of the game capped off what was an extremely eventful 90 miuntes for the 23-year-old shot-stopper, with him also pulling off a stunning early contender for save of the season in the games first half.

After playfully taunting the City fans for a few moments Ramsdale then turned around and approached the travelling Arsenal fans where he received a rather different reaction.

Post match celebrations – starting with Ramsdale celebrating in front of the Leicester fans who had been giving him grief throughout the second half.

Banging his Arsenal badge and then bowing in front of them 😂 pic.twitter.com/IC3brTmqMK

Watch: Arsenal’s Aubameyang taken out by WWE tackle from Evans