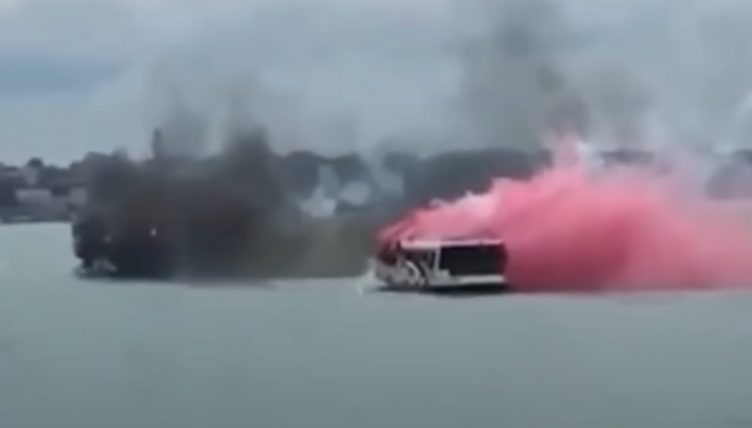 Football hooliganism is bad. It’s not big, it’s not clever, and it’s definitely not funny. Or at least it’s not unless it’s conducted on passenger ferries, as AC Milan and Venezia fans demonstrated over the weekend.

The game between the teams on Sunday went pretty much as expected, with second-placed Serie A side Milan running out comfortable 3-0 victors against 17th-placed Venezia.

A very early goal from Zlatan Ibrahimovic was added to in the second period by two strikes from left-back Theo Hernandez. A red card for Michael Svoboda made a comeback impossible. All fairly routine.

The journey to the stadium, however, was anything but routine.

AC Milan are one of the world’s biggest clubs and boast a huge fanbase, who have, over the years, cultivated quite the reputation for their tifo and pyrotechnic displays at San Siro, especially on derby days.

On Sunday, they took it a step further.

Venezia’s Pier Luigi Penzo Stadium can be accessed by one of Venice’s famous ferry rides and on the way, Milan and Venezia ultras became embroiled in what can best be described as a full-blown pyro naval battle.

The Venezia ferry, engulfed in black smoke, launched fireworks at the Milan ferry, shrouded in red smoke, which retaliated in kind.

Fortunately, both sets of fans showed the sort of aim most often witnessed from the henchmen of Bond villains, seemingly missing with all their attempted missiles.

It makes what could potentially be quite a bad experience into an amusing one.

All we can say is we hope every got to the ground without resorting to the use of a life jacket or rubber dinghy. We can’t imagine that water would be too inviting in early January.

Away days in Venice.

Venezia and AC Milan ultras having a naval battle.