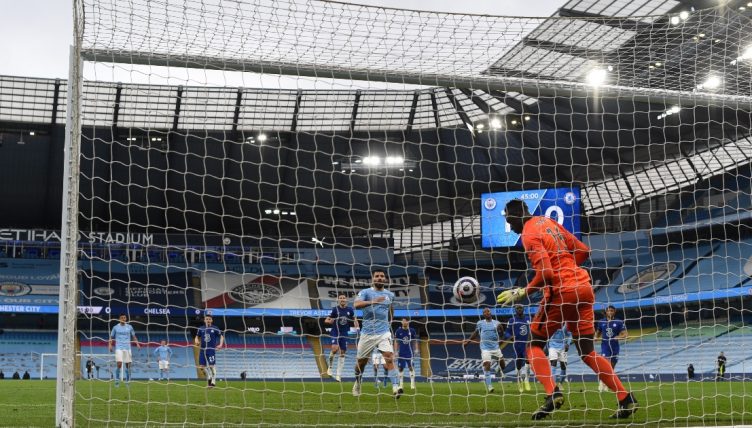 Manchester City welcomed Chelsea to the Etihad on Saturday evening knowing that a win would see them clinch a fifth Premier League title and the third of Pep Guardiola’s reign.

The stage was also set for Sergio Aguero to seal it. Kevin De Bruyne, Phil Foden and Riyad Mahrez were all rested after helping the club into their first Champions League final in midweek so the Argentinian was given the chance to round off his time in Manchester in style.

He was offered a good chance to do so by Gabriel Jesus, who laid the ball back to Aguero for a tap in after 44 minutes. His touch let him down, however, and Raheem Sterling had to finish the chance instead.

But he had to wait just two minutes for another opportunity and it came from the penalty spot. Billy Gilmour got into a tangle with Jesus, resulting in Anthony Taylor pointing to the spot.

Aguero stepped up and attempted to dink the ball down the middle and embarrass Edouard Mendy. But the goalkeeper was not fooled, simply lifting an arm to catch the weak attempt.

And after all, Ruben Dias is Manchester City’s Wonderwall