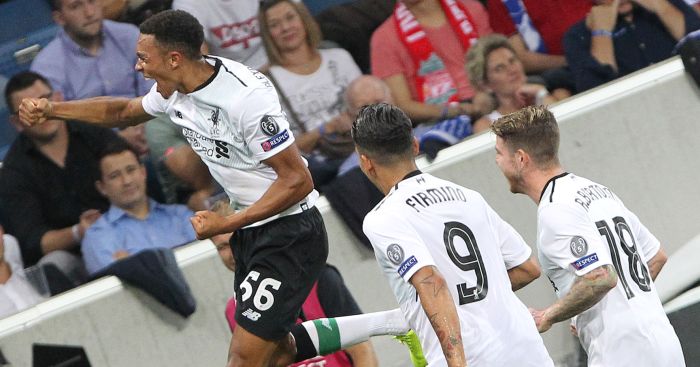 Trent Alexander-Arnold helped keep Liverpool’s hopes of reaching the Champions League group stage on track on Tuesday with a wonderful free-kick in their 2-1 victory over Hoffenheim.

The Reds take a one-goal advantage back to Anfield for next Wednesday’s second leg as they look to reach the group stage for the first time since 2014.

Alexander-Arnold, who has only made 14 first-team appearances for Liverpool, was given another chance to deputise for the injured Nathaniel Clyne at right-back and duly repaid Jurgen Klopp’s faith in him.

On 35 minutes the 18-year-old lofted a perfectly flighted free-kick up and over the Hoffenheim wall and into the bottom corner of the net to make it 1-0.

A Havard Nordtveit own goal doubled the Reds’ lead in the 74th-minute after James Milner’s shot deflected off the midfielder’s chest and found the top corner.

Mark Uth pulled one back for the Bundesliga outfit in the last few minutes, but the Merseysiders hung on for a valuable away victory.

Steven Gerrard was quick to praise Alexander-Arnold’s peformance after the match and tipped him to become a “top player” for Liverpool.

“It was fabulous free-kick and it’s ironic as Philippe Coutinho would probably have taken that if he was available,” Gerrard told BT Sport.

“It was a fantastic strike and what character he showed to step up ahead of more experienced players and take it.

“I know him well, he’s going to be a top, top player and Nathaniel Clyne has to be careful as Trent is already breathing down his neck.

“He’s great professional, he’s down the academy all the time, he’s very grounded,” added Gerrard during the half-time analysis.

“He always wants to learn and improve, and I’m absolutely delighted for him and his family. It bodes well for the future.”