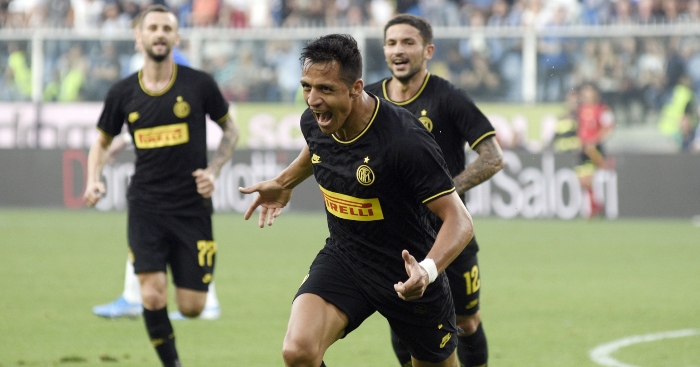 Manchester United’s Alexis Sanchez has scored his first two goals for Inter Milan, but he was also sent off during their 3-1 win over Sampdoria.

The forward had a terrible 18 months at Old Trafford and scored five goals in 45 appearances for the Red Devils, so he moved to Italy on loan for the 2019-20 season.

Sanchez opened his account for Inter in fortunate circumstances as a Stefano Sensi shot deflected off his backside and found the back of the net.

😂 Does this count as Alexis Sanchez’s first goal for Inter?

🔵⚫Stefano Sensi hits one from distance and the Chilean’s back helps it in to put the Nerazzurri 1-0 up against Sampdoria! pic.twitter.com/UbTM5CxoNW

The 30-year-old then added a second moments later, as he pounced on a loose ball and doubled Inter’s lead.

⚽ The first one might have been fortunate, but there’s no doubting this is Alexis Sanchez’s goal!

⚫🔵 A dream start for Inter and a perfect spell for the new No. 7⃣ pic.twitter.com/DbtGhcyy1o

However, he went from hero to zero in the second half as he received a second booking for diving, but Inter were able to hold on and seal the win.

🔴 SANCHEZ SENT OFF FOR DIVING!

🙈 Two goals and now a red card for Alexis Sanchez on his first start for Inter! pic.twitter.com/ceK4VWNvaO