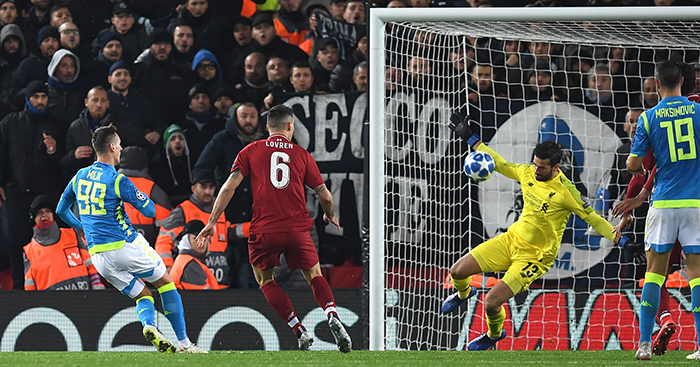 Liverpool progressed to the last 16 of the Champions League with a 1-0 win over Napoli at Anfield on Tuesday night – but they were indebted to a brilliant late save from Alisson.

Liverpool took the lead in the 34th minute when Mohamed Salah squeezed a shot under David Ospina at the near post.

Virgil can Dijk and Sadio Mané had good chances to increase the Reds’ advantage, but Napoli posed a threat throughout and knew if they scored it would leave the hosts needing to score twice more to go through at their expense.

As it turns out, however, a solitary goal was all Jurgen Klopp’s side needed as Alisson once again proved his worth in the second minute of stoppage time when a cross somehow found its way through to Arkadiusz Milik six yards out.

The Poland forward’s first touch was good, but Alisson was off his line as quick as a flash, making himself big to save with his legs.

You can watch the heart-in-mouth moment below.