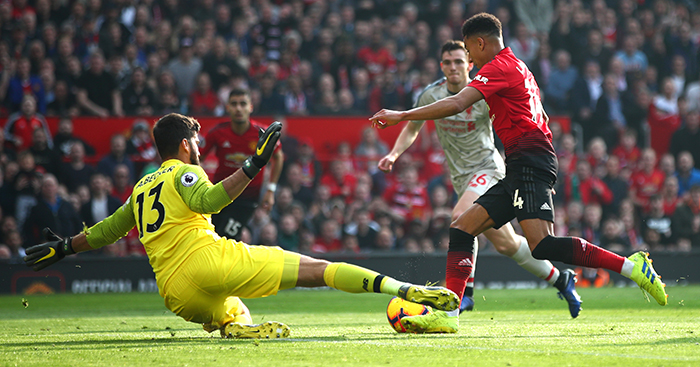 There weren’t too many chances to score in Manchester United’s 0-0 draw with Liverpool on Sunday – and Alisson was at his best when Romelu Lukaku did create one for the hosts.

United lost Ander Herrera, Juan Mata and substitute Jesse Lingard to injuries during the first half at Old Trafford, with Marcus Rashford forced to play through the pain barrier for much of the game.

Ole Gunnar Solskjaer’s side were already without Nemanja Matic and Anthony Martial but despite their problems managed to claim a credible point against their title-chasing visitors – and arguably fashioned the best opportunity for a winner, too.

It came in the first half when Lukaku collected Paul Pogba’s pass outside of the box and, after deciding against shooting, slipped a brilliant pass between three defenders to set Lingard one-on-one with Alisson.

The England man looked to have taken the ball wide of the Reds goalkeeper with a good first touch, but Alisson clawed the ball away from his feet at his last moment and was quickly down to smother before Andreas Pereira could nip in.