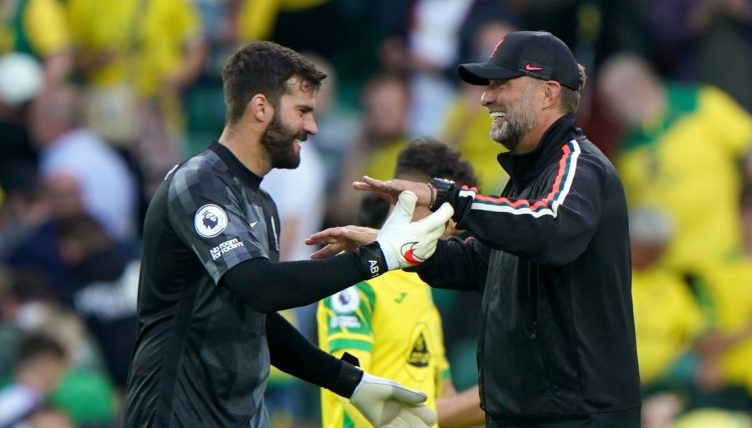 After his goalscoring exploits at the end of last season, Alisson Becker was back to his day job for Liverpool‘s 3-0 win over Norwich City.

The Reds were plagued by a series of injury problems in 2020-21 but are vying to regain the Premier League crown after Manchester City’s triumph.

Diogo Jota scored their first goal of 2021-22 before Roberto Firmino came off the bench to double Liverpool’s lead against the Canaries.

After getting the assists for the first two goals, Mohamed Salah got on the scoresheet by curling a fine strike into the back of the net.

Norwich looked set to score a late consolation goal, only for Alisson to make three brilliant saves and preserve their clean sheet at Carrow Road.

“It was needed, keeping the clean sheet,” Alisson told Sky Sports after the game. “I think the save doesn’t affect the result if I don’t make it but it was good to make it, it feels like scoring in the last minute.”

For those who missed it. Here is Alisson’s incredible stopped against Norwich!

He really is special 👏🏻pic.twitter.com/cHfSsQ4SVJ