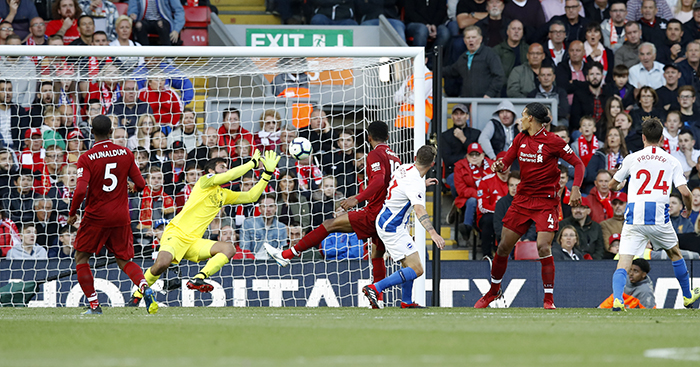 Alisson Becker has become only the fourth Liverpool goalkeeper in 51 years to keep a clean sheet in each of the first three league games of a season – and he once again showed off his ability with his feet in the 1-0 win over Brighton.

Alisson has followed in the footsteps of Bruce Grobelaar, Pepe Reina and Simon Mignolet in starting with three consecutive shutouts, making an outstanding save to tip Pascal Gross’ header around the post in the closing stages as Liverpool held on for another three points.

The Reds are two points clear of Manchester City at the top of the Premier League and the only team to have won all three of their games so far, though Chelsea, Watford and Tottenham could all match them on Sunday.

Alisson did have one hairy moment when he tried to beat Glenn Murray but got into trouble, however, the Brazilian could be excused his confidence after the way in which he dealt with a loose ball earlier in the game as Anthony Knockaert closed him down.

Watch the moment below…