Watch: All the goals as Liverpool Legends beat Rangers Legends 3-2 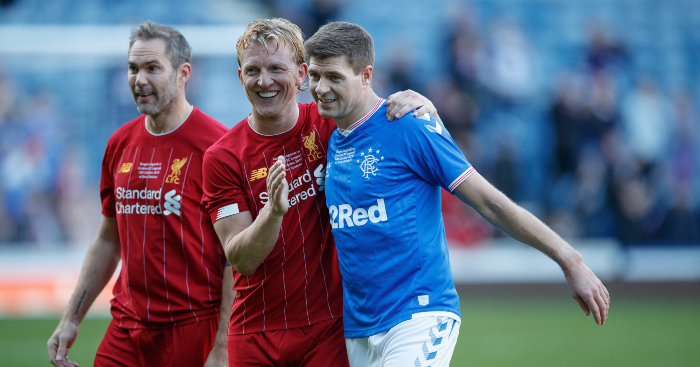 Steven Gerrard turned out for both Liverpool Legends and Rangers Legends at Ibrox on Saturday as the Reds triumphed 3-2.

Rangers boss Gerrard was jokingly booed by the home support while representing Liverpool in the first half during an entertaining match in Glasgow.

Kris Boyd could have given Rangers an early lead after Jamie Carragher conceded a penalty, only to drag his spot-kick wide with Jerzy Dudek in goal.

And Liverpool made Boyd pay for his error when Dirk Kuyt crossed for Luis Garcia to score.

Patrik Berger then doubled Liverpool’s lead by finishing off a slick counter-attack, with Gerrard at the heart of the move.

Boyd at least atoned for his earlier miss by pulling a goal back for Rangers, finishing off Lee McCulloch’s pass.

But Emile Heskey restored the Reds’ two-goal lead, and even pulled out his trademark DJ celebration.

Peter Lovenkrands bagged the fifth goal of the first half to reduced the scoreline to 3-2, but the second half passed by without a goal as the Reds emerged victorious.

🎥 GOAL! @lovenkrands11 grabs a second goal for the Gers | 2-3 pic.twitter.com/wWduhQpPNr