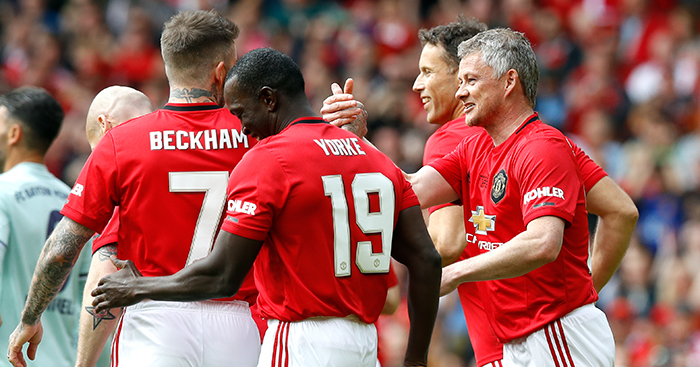 Manchester United and Bayern Munich legends reunited on Sunday to mark the 20-year anniversary of that famous Champions League final – and it was the Premier League side who once again came out on top.

Twenty years to the day since that memorable night in Barcelona, 10 of the same starting XI once again took to the field for United, managed by Sir Alex Ferguson, with only Ryan Giggs absent due to Wales duties.

Lothar Matthaus, Markus Babbel, Sammy Kuffour, Stefan Effenberg and Carsten Jancker of Bayern’s starters in 1999 were involved for the visitors, while United’s bench included Ole Gunnar Solskjaer and Teddy Sheringham, just as it had done at the Nou Camp.

Solskjaer was brought on in place of Andy Cole shortly after kick-off, however, and it was the current United boss who got the ball rolling with a tap-in following good work from David Beckham, Dwight Yorke and Jesper Blomqvist.

Yorke made it 2-0 with a lovely volley before half-time, with Nicky Butt and Louis Saha, one of four post-99 players involved – Ji-sung Park, Louis Saha, Mikael Silvestre and Karel Poborsky were the others – making it 4-0.

Beckham capped a fine display with the fifth in the last minute.

You can watch all the goals from the game below and can donate to the Manchester United Foundation by following this link.