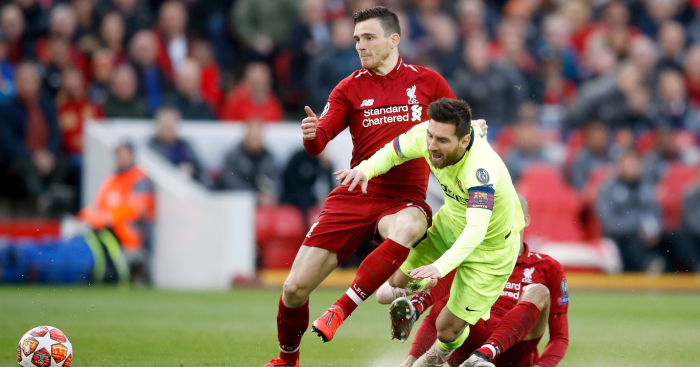 Lionel Messi was given a not-so-warm welcome to Anfield from Andy Robertson in the first minute of Liverpool‘s second-leg clash with Barcelona in the Champions League semi-final on Tuesday night.

Messi tormented Liverpool as Barcelona ran out 3-0 winners in the Nou Camp in the first leg, scoring twice in a brilliant individual display, including a stunning long-range free-kick late on.

The Reds had in fact played well, despite what the scoreline suggests, with Robertson one of their best performers in a typically energetic display from left-back.

And the Scotland international made his presence felt on Messi early on at Anfield, giving the Barcelona superstar a little shove on the head as the Argentine pleaded for a free-kick on the ground.