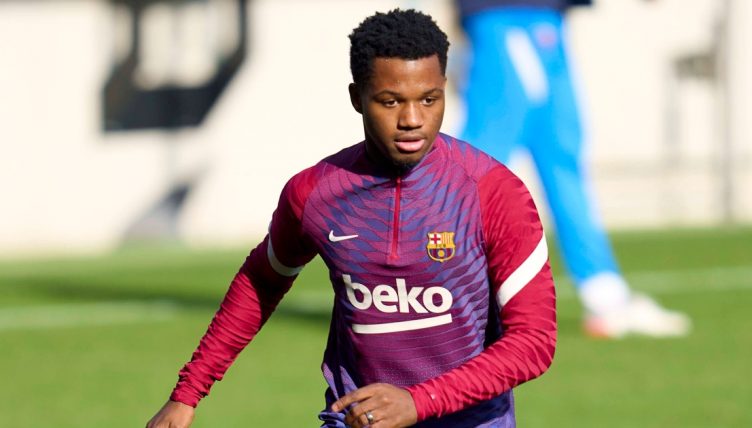 Barcelona winger Ansu Fati delighted his team-mates by making his long-awaited return to first-team training after a hamstring injury.

Fati came through the La Masia academy and enjoyed a brilliant breakthrough debut season in 2019-20, becoming Barcelona’s youngest ever goalscorer.

But the teenager then injured the internal meniscus of his left knee in November 2020 and spent several months on the sidelines. He made his comeback in September, only to pick up another knee injury in October and then a hamstring injury in November.

It then looked as though the winger might be able to kick on, but he suffered a recurrence of the hamstring injury in their Copa del Rey defeat to Athletic Bilbao in January. The Spain international was in tears as he made his way off the pitch.

“It’s a pity,” Xavi said. “He had just recovered his confidence and was doing well. He is very affected.

“We need him, we have lost an impressive footballer, so it affects us all but most of all, Ansu. We have to recover him mentally and make him forget about the injuries.

“We have to be positive and hope that he doesn’t get injured anymore.”

Fati reportedly went against the advice of Barcelona by opting to avoid surgery before following a conservative recovery plan.

After undoing a series of medical checks at the club, he was given the green light to get back to work on the training ground earlier this week. Fati then received a warm welcome from his team-mates at the Ciutat Esportiva.

According to reports in Spain, the winger could return in the next two weeks if there are no setbacks in training but Barcelona don’t want to take any risks.

Ansu Fati is welcomed back to training by his teammates 😍