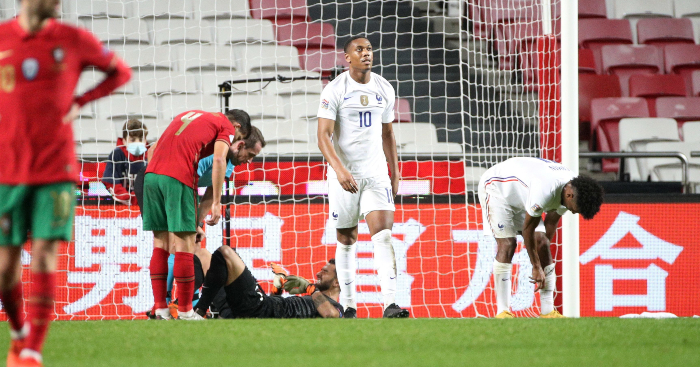 Manchester United forward Anthony Martial added injury to insult for Wolves’ Rui Patricio when accidentally catching the goalkeeper right where no man ever wants to be hit in France’s 1-0 victory over Portugal.

Patricio was subjected to the rare feeling of conceding a goal to N’Golo Kante – *pulls Thomas Muller’s Robert LewanGOALski face* – before taking Martial’s studs right to the bollocks and requiring treatment.

In an even crueller twist of fate, Patricio had just made an excellent save to prevent Martial from scoring, only for the attacker to find himself unable to halt his momentum and crash into the goalkeeper.

Just to warn you, lads, this is going to make you wince.

🚨Great save by Rui PATRÍCIO to reject Martial for a 2nd time today! pic.twitter.com/SOe0jhaZ5J