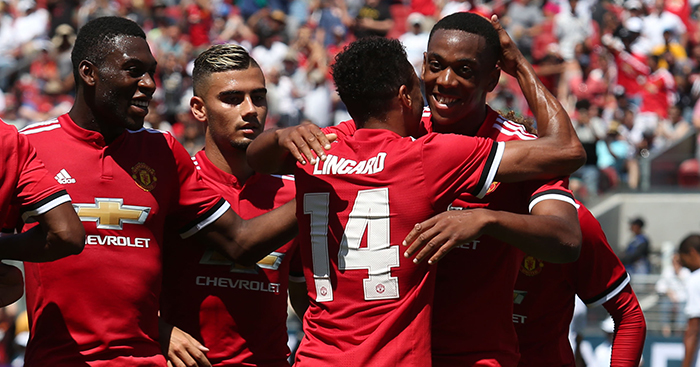 Manchester United continued their good pre-season form with a penalty shootout win over Real Madrid after a 1-1 draw in Santa Clara.

United, who have now won all four of their games in the United States, took the lead in first-half stoppage time when Anthony Martial produced some outstanding dribbling to cut in from the left wing and set up Jesse Lingard for a tap-in.

Casemiro equalised for Real from the penalty spot midway through the second half after Victor Lindelof brought down Theo Hernandez, but the Brazilian later hit the crossbar with the decisive spot-kick in an low-quality shootout which saw seven out of 10 players either miss or have their efforts saved.

Half-time substitute Ander Herrera lasted only six minutes before going off with a hip injury for United, but the other main talking point of the evening was the presence of Ronald McDonald, who led the two teams out before standing among the officials to shake hands with both sets of players before kick-off.

After the game, Mourinho said of Martial: “Obviously we want more consistency in his talent. I think today was positive for him, that’s why I left him on for 90 minutes.

“He was enjoying trying things so I think it’s good for Anthony and his confidence.”

Watch his mesmerising dribble below.