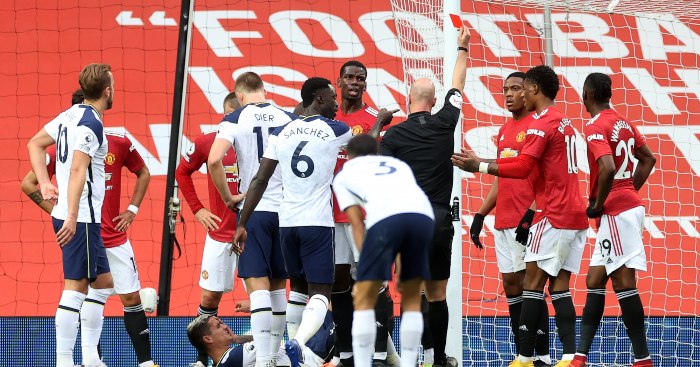 Just when you thought the opening half of Manchester United‘s Premier League clash with Tottenham couldn’t get any crazier, Anthony Martial decided to give Erik Lamela a little slap.

As Jose Mourinho returned to his old stomping ground with both sides having made a slow start to the season, pundits were predicting a cagey affair at Old Trafford.

But such predictions were blown out of the water after just 30 seconds, when Tottenham conceded a penalty and Bruno Fernandes gave the hosts the lead.

Spurs bounced back almost immediately, equalising through Tanguy Ndombele before Son Heung-min put them ahead.

The north Londoners squandered chances to increase their lead, but United continued to self-destruct when Martial was sent off for a slap on Lamela, who himself appeared to nudge the France international with his elbow but escaped punishment.

And to compound United’s woes, Harry Kane scored almost immediately after the restart to make it 3-1 after just 30 minutes before Son bagged his second seven minutes later.

Eric Lamela puts his arm to Anthony Martial's face in the box before the Frenchman retaliates and is sent off! 😲🟥

Have #THFC got away with one there?

Watch: Mourinho apologises to Southgate; jokes he can call him ‘John’