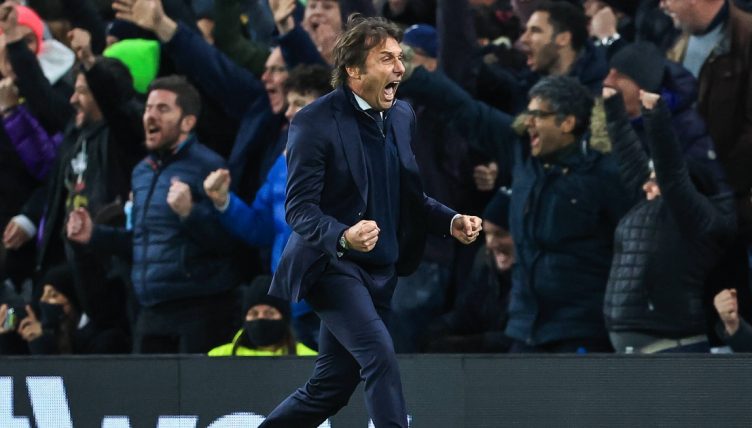 Tottenham beat Leeds United 2-1 in Antonio Conte’s first home game as manager – and he reacted in the manner to which we’ve all become accustomed.

Conte has had to wait three weeks to take charge of a match at the Tottenham Hotspur Stadium and it looked like turning into an anti-climax after Dan James gave Leeds the lead.

It would have hit Conte hard to hear his side booed off at the interval but goals by Pierre-Emile Hojbjerg and Sergio Reguilon gave Spurs a valuable three points.

As the final whistle was blown, Conte pumped his arms in delight and bear-hugged everybody in sight. It looked like he was about to chin somebody in celebration at one point.

Speaking to Sky Sports after the game, the Spurs boss said: “I’m pleased because we played very well in the second half and I think we deserved to win.

“This is a starting point. I said this to the players: they have to understand that, if they want to [achieve something], they can.

“Maybe it was good to concede just before half-time. The players showed a great desire to win the game. We knew about Leeds. I read the stats and Leeds were top for the intensity [for distance covered].

“In the second half we beat them.”