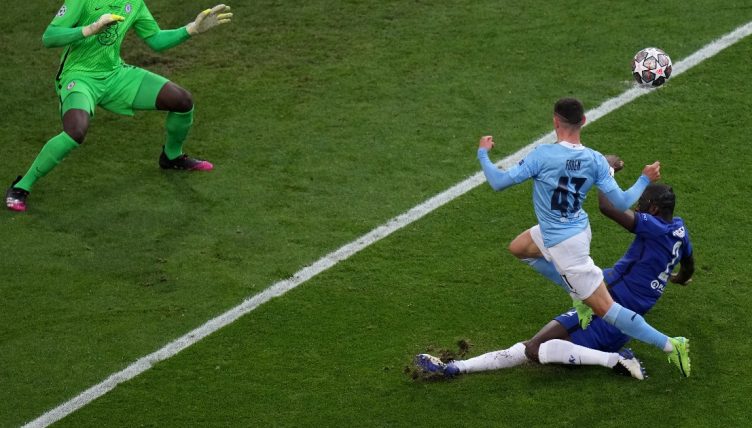 Chelsea and Manchester City faced-off in Porto’s Estadio do Dragao in the Champions League final on Saturday night and both defences had plenty to do early on.

It was the third all-English final in Europe’s top competition, following Manchester United and Chelsea’s match-up in 2008 and Liverpool and Tottenham’s meeting in 2019.

Pep Guardiola caused a stir when he picked neither Fernandinho or Rodri in his starting XI, opting to include Raheem Sterling from the offset in an attacking line-up.

But no side has kept no clean sheets since Thomas Tuchel’s arrival than Chelsea, and their ever reliable back three of Cesar Azpilicueta, Thiago Silva and Antonio Rudiger started together for the Blues.

The latter was involved in a huge moment midway through the first-half, as a lovely Manchester City move eventually saw the ball fed into Phil Foden in the Chelsea box.

The midfielder’s first touch set himself perfectly for a left-footed strike, but Rudiger emerged from seemingly nowhere to block his well hit shot.

It looked all the more important when, just three minutes before half-time, his fellow Germany international was played clean through on goal.

Oozing composure, the attacker skipped around Ederson before rolling the ball into an empty net to give the Londoners the lead.

A huge moment in the game.

Antonio Rüdiger with an incredible block against Phil Foden! 💪