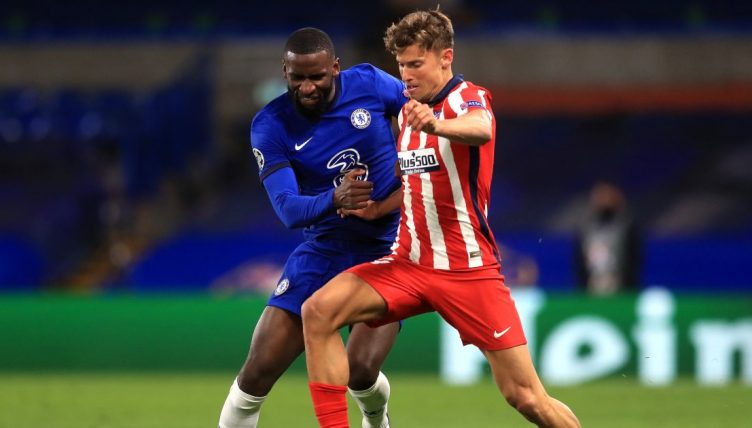 Antonio Rudiger found himself at the centre of controversy as Chelsea beat Atletico Madrid 2-0 to reach the Champions League quarter-finals, and the centre-back appeared to be thoroughly enjoying himself throughout.

Leading 1-0 after a cagey first leg played in Bucharest, Chelsea took a huge step towards progressing when Hakim Ziyech opened the scoring from a slick counter-attack in the first half, finishing off a move that involved fellow summer signings Kai Havertz and Timo Werner.

And Atletico were made to pay late on after former Manchester City defender Stefan Savic was given a straight red card for elbowing Rudiger at a corner.

The red prompted discussion on BT Sport over whether Rudiger had gone down too easily as Savic fumed at the officials before leaving the pitch.

Rudiger himself didn’t seem to care too much, giving Mario Hermoso a cheeky pat on the head and laugh as the Atleti defender confronted him over the incident.

It was the type of shithousery Diego Simeone would no doubt have been proud of in his own team, and Rudiger had the last laugh when substitute Emerson Palmieri came off the bench to score with his first touch in injury time and complete a convincing victory on aggregate.

Watch the red card incident below, followed by Rudiger’s quite wonderful exchange with Hermoso.

From bad to worse for Atletico Madrid…