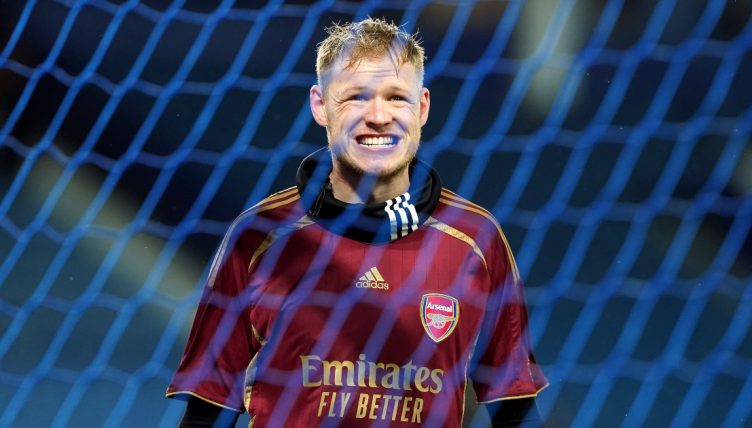 Aaron Ramsdale showed how confident he was with the ball at his thighs, not just his feet during Arsenal’s Premier League victory over West Ham.

In another impressive performance, Ramsdale had to make only one save on the night with West Ham nullified in attack, but was confident and composed on the ball and helped Arsenal to build up from the back.

There was a nervy moment when Gabriel sent a backpass back towards Ramsdale, under pressure from Jarrod Bowen.

But Ramsdale didn’t panic, rushing to meet the ball by sliding to the floor and lifting the ball over Bowen with his thigh with Kieran Tierney collecting the ball and starting a new Arsenal attack.

The English goalkeeper has proved himself to be an important acquisition by Mikel Arteta, providing a composed and confident goalkeeper in top form behind the rejuvenated Arsenal defence.

He has also produced some stunning saves, although he wasn’t much called into action against West Ham.

Those two things have combined to mean Ramsdale has replaced Bernd Leno as Arsenal’s outright No.1 following his £25million move from Sheffield United.

Prior to his move, he had suffered two relegations in two seasons with Sheffield United and Bournemouth, but at Arsenal, he has hit impressive form and was given his first England cap earlier this year.

Arsenal’s 2-0 victory over West Ham saw them leapfrog the Hammers into fourth place, which has become a realistic finish for the Gunners for the first time in several seasons.