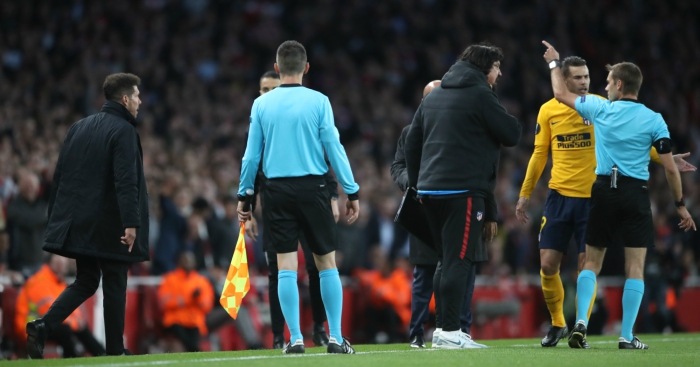 Atletico Madrid had a potentially catastrophic first quarter of an hour of their Europa League semi-final first leg against Arsenal.

The Spanish side saw Sime Vrsaljko sent off for two bookable offences inside the opening 10 minutes, leaving the hosts 80 minutes to play with a man extra on the field.

Manager Diego Simeone, who has been linked with the soon-to-be vacant hot seat at Arsenal, reacted in a typically furious fashion to the second yellow card, which looked soft on first viewing.

However, replays showed that it was a good call from the referee, as Vrsaljko left his boot in studs up on Alexandre Lacazette.

And just a few minutes later, Simeone was given his own marching orders after being visibly infuriated by a free-kick given in front of the away dugout, for which he thought Hector Bellerin deserved a yellow card.

Home supporters enjoyed the moment, and were caught on camera waving the furious manager off as he made his way to the stands.

Watch the moment Simeone was sent off below.