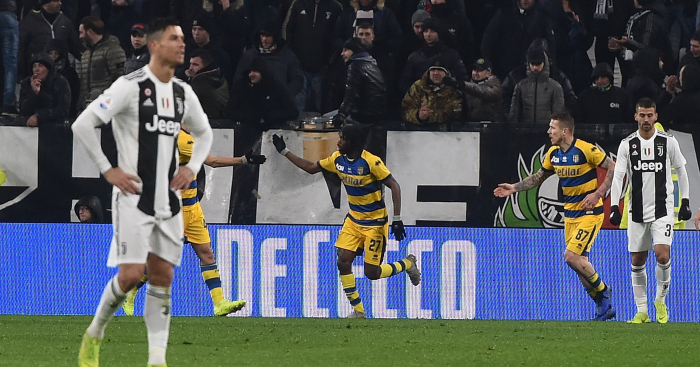 Former Arsenal flop Gervinho stunned Cristiano Ronaldo’s Juventus with two late goals as Parma came back from 3-1 down to draw 3-3 in Turin.

Juventus appeared comfortable as Ronaldo’s opener and a Daniele Rugani goal put the hosts 2-0 up just after the hour mark.

A crazy 10-minute spell followed as Antonio Barilla pulled one goal back for Parma, only to see Ronaldo get his second two minutes later and restore Juve’s two-goal lead.

And in the third minute of stoppage time, the forward fired home a dramatic equaliser which goalkeeper Mattia Perin failed to keep out.

A furious Max Allegri slammed his players “superficial” attitude after the match.

“Beautiful football doesn’t pay off, at the end of the day you’ve got to just kick it away from your goal,” the Juve boss told DAZN.