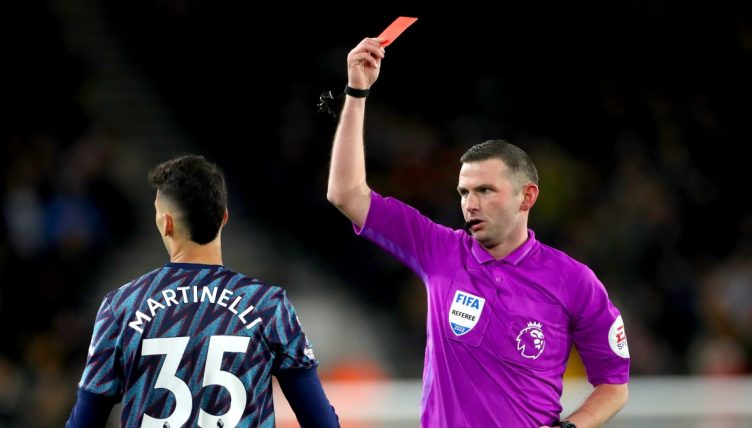 Gabriel Martinelli was sent off during Arsenal’s 1-0 win over Wolves after receiving two yellow cards in the space of a few seconds.

Arsenal have become renowned for ill-discipline under Mikel Arteta and Granit Xhaka has already been sent off on two separate occasions this season.

Gabriel was recently sent off for two bookable offences against Manchester City and Thomas Partey was also shown a red card during the EFL Cup semi-final defeat against Liverpool.

“We played three games out of five with 10 men, and if that’s one of the things in the last 17 games that we continue to do, our chances to be where we are going to be really low,” Arteta said before the game against Wolves.

“We have to play with 11 players on the pitch. We need most of the players available and fit as much as possible. We need to maintain the togetherness. We have to keep improving our game model and we have to go game by game.

“To do that we have to be super focused and we have to perform on the day and the rest will come because we are in the position where it’s possible and we can achieve it but only if everybody has that mindset.”

But Martinelli received Arsenal’s fifth red card of the campaign when he was dismissed for two bookable offences within the space of 30 seconds.

The Gunners were still able to hold on for the win and have moved above Manchester United into fifth place in the Premier League.