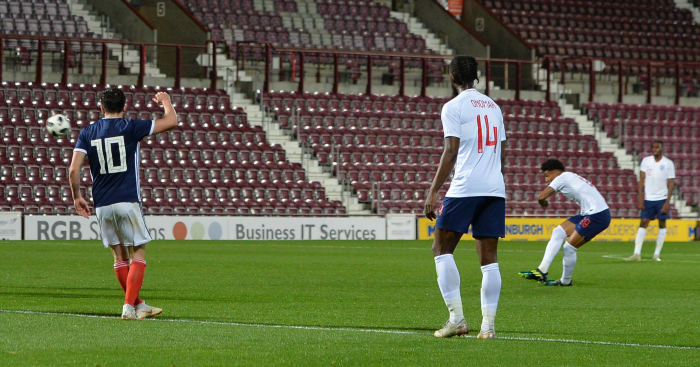 Reiss Nelson gave Arsenal a nice reminder of his talent with a brilliant free-kick as England’s Under-21s beat their Scottish counterparts 2-1 on Tuesday night.

Nelson played 16 times in all competitions for Arsenal in his breakthrough season last term, featuring most heavily in the Europa League.

The 18-year-old is yet to open his account for the Gunners but has already scored twice in three Bundesliga appearances for Hoffenheim, who he joined on a season-long loan in August.

And the forward continued his good goalscoring form after making his debut for England Under-21s.

Nelson notched on his first appearance for Aidy Boothroyd’s outfit in a 7-0 win against Andorra last week and opened the scoring against Scotland with this superb second-half free-kick before Kieran Dowell added a second in stoppage time.