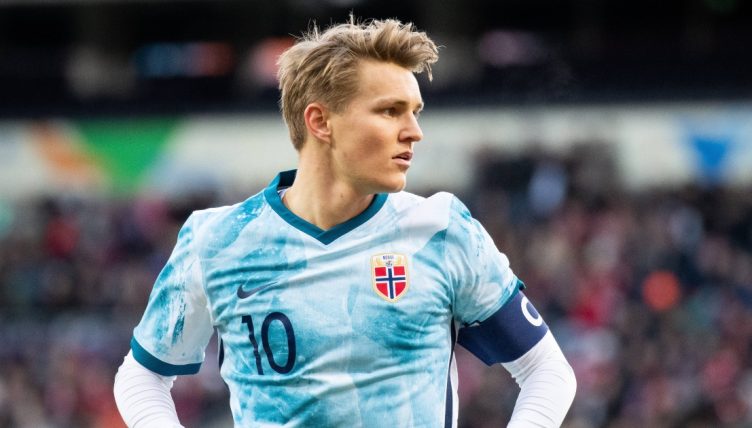 Arsenal’s Martin Odegaard got two assists during Norway’s 9-0 win over Armenia – but the real moment of the game came when he utterly humiliated their defenders.

Odegaard famously made his senior Norway debut at the age of 15 before being snapped up by Real Madrid in January 2015. But he made just 11 first-team appearances for Madrid and had four different loan spells away from the Bernabeu.

After spending the second half of last season on loan at Arsenal, the midfielder then made the move permanent in a £30million deal.

Odegaard has gone from strength to strength in 2021-22, helping Arsenal move into fourth spot with five goals and three assists in 26 Premier League appearances.

“Yes, definitely,” he recently told the PA news agency when asked if he now felt more settled than ever. “I feel like I’m home now. I have had time to settle down – for the last five years I’ve been all over the place with loans here and there.

“So I feel like I’ve finally got that stability and the calmness I needed. So I’m really happy, yes.”

The 23-year-old has carried his impressive form into the international break, scoring a brilliant goal in Norway’s 2-0 win over Slovakia.

He then set up two of their nine goals against Armenia as Joshua King got a hattrick, Erling Haaland and Alexander Sorlorth both got braces and Mats Moller Daehli and Kristian Thorstvedt also got on the scoresheet.

During the closing stages of that win at the Ullevaal Stadion, Odegaard decided to entertain the fans with a bit of showboating.

After taking a throw-in, he got the ball back before nutmegging Gevorg Ghazaryan and tricking two other defenders with great skill.

A superb Xl of players sold by Arsene Wenger at Arsenal: Fabregas, Henry…