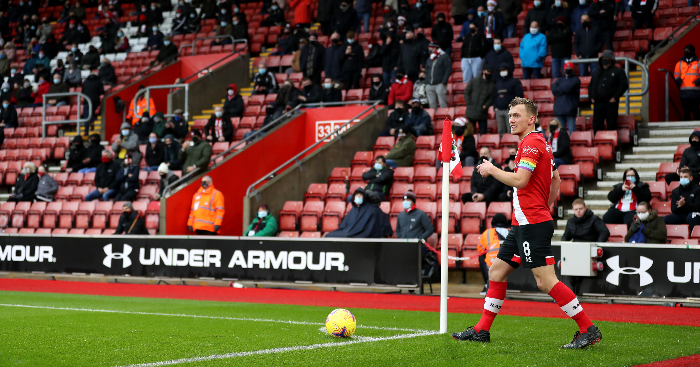 Arsenal and Southampton met in the first of two meetings in a week and it was nearly immediately one to forget for Gunners’ goalkeeper Bernd Leno.

James Ward-Prowse has been one of Ralph Hassenhutl’s stand-out performers this season, with his set-piece deliveries, in particular, causing regular havoc for opposition defenders

He started this fourth-round FA Cup clash in fine fettle too, with a run of corners troubling Mikel Arteta’s backline.

By this stage of the season, we all know Ward-Prowse’s prowess when it comes to scoring spectacular free-kicks, but at St. Mary’s on Saturday he seemed intent on raising the stakes further by trying to score from a corner.

Whether he meant it or not is up for debate. But you would not put it past him, would you? His chopped delivery appeared to swerve in flight, clearly panicking Leno in the Arsenal goal.

The German ended up in a crumpled heap in the goal as the ball crashed against the bar, with a huge sigh of relief no doubt forthcoming once he saw he had avoided embarrassment.