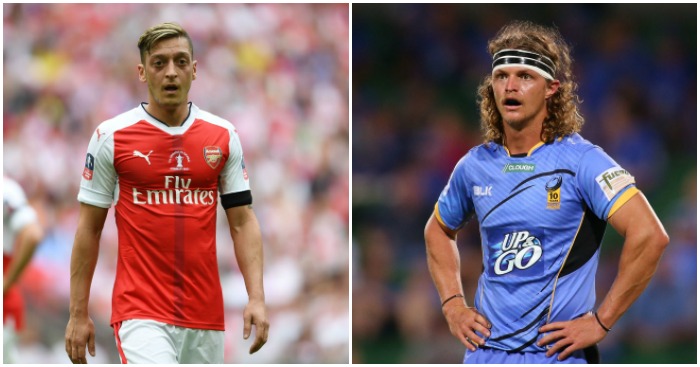 Arsenal have one of the most multi-cultural squads in the Premier League – but Mesut Ozil and co. might as well have met something from outer-space when they tried to understand Australian rugby player Nick Cummins.

The Gunners have players from the likes of Brazil, Bosnia, Egypt and Nigeria, but crucially they have not been exposed to the uber-Aussie accent demonstrated from Cummins.

Western Force winger Cummins, nicknamed ‘The Honey Badger’, is as Australian as putting another shrimp on the barbie, and has become a cult hero thanks to his quick wit and effervescent personality.

Arsenal are set to travel to Australia for their pre-season tour, but judging by the reactions of Ozil, Olivier Giroud and Nacho Monreal to one of Cummins’ post-match interviews, they may have a tough time understanding the locals.

Even if they can’t understand people Down Under, they have at least tried to pick up some of the lingo, to varying levels of success…