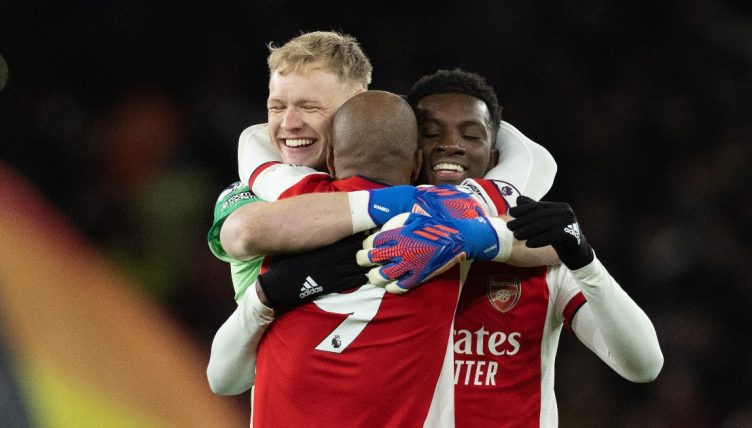 Arsenal players celebrated ecstatically on the Emirates pitch at full-time after Jose Sa’s own goal deep into injury time gave the hosts the three points against Wolves.

Hwang Hee-Chan handed Bruno Lage’s side a first-half lead before Nicolas Pepe equalised in the latter stages. The Premier League clash looked to be fizzling out to a draw, but in the last-minute, Wolves goalkeeper Sa deflected Alexandre Lacazette’s effort into his own net.

The Gunners received criticism from Wolves players earlier this month for their perceived over-exuberant reaction to winning the reverse fixture at Molineux.

Conor Coady said post-match two weeks ago: “We saw the way they celebrated the win and that shows the level we are.”

“I didn’t see Arsenal celebrating like this in the past 10 years – it was like they won the league.”

The celebrations of the Gunners were no less muted this time around. Mikel Arteta and his players embraced each other joyfully as they moved just one point adrift from fourth spot in the table.

“It was an important win for us,” Arteta explained in his post-match interview.

“The way we won, it creates such a belief and togetherness and an atmosphere and cohesion with our fans as well and that’s extremely necessary. This is a really young squad and we need that.”