Watch: Arsenal trio try to get to grips with Aboriginal life 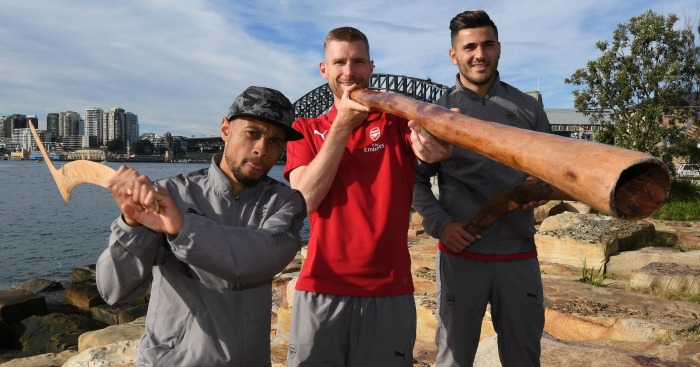 Arsenal are currently on a pre-season tour of Australia – and their players have been experiencing traditional Aboriginal life in Barangaroo.

The Gunners kicked off their pre-season with a 2-0 win over Sydney FC at the ANZ Stadium.

Record signing Alexandre Lacazette got off to a perfect start in an Arsenal shirt, scoring only 15 minutes after coming off the bench in his first appearance as a Gunners player after Per Mertesacker had opened the scoring early on.

Arsene Wenger’s men wrap up their tour with a clash against Western Sydney Wanderers on Saturday, but they have been trying to absorb as much of the local culture as possible.

We’ve already seen the likes of Mesut Ozil and Nacho Monreal hilariously struggle to understand and learn the local lingo.

And Mertesacker was introduced to some of the idiosyncrasies of Abroginal life alongside Francis Coquelin and new signing Sead Kolašinac.

Coquelin’s face in particular after hearing a didgeridoo is rather brilliant.