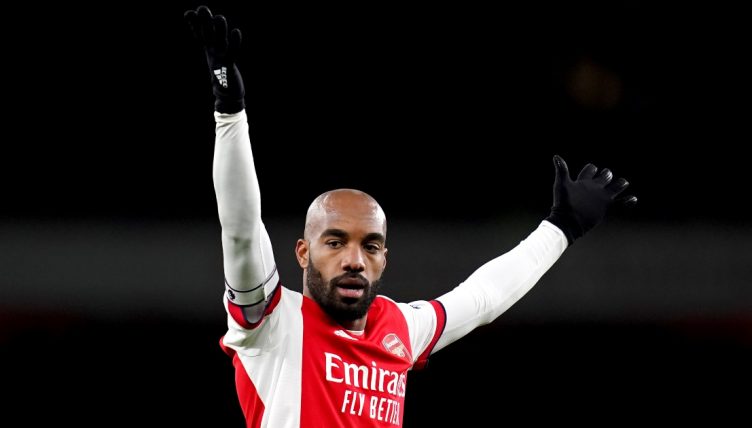 Alexandre Lacazette had a fine match as Arsenal moved up to fourth with a 3-2 win at Watford – but the Arsenal captain may feel aggrieved that he wasn’t awarded a second-half penalty.

Lacazette has been left to carry the burden of Arsenal’s attacking threat following the departure of Pierre-Emerick Aubameyang in January.

And the 30-year-old, who joined the club in 2017, received praise from manager Mikel Arteta before Sunday’s match against Watford.

“Laca has a really important quality, which is that he makes the people around him better”, Arteta said.

“He understands the game really well, he’s a really intelligent player and his work rate is phenomenal.”

And those qualities were on display at Vicarage Road as Lacazette laid on two goals during Arsenal’s latest Premier League victory.

He allowed Bukayo Saka to play a delicious one-two with him before curling the Gunners into a first-half lead and provided a neat lay-off for Gabriel Martinelli to curl home a wonderful third goal for Arteta’s side.

But the France international may feel he should have been given the opportunity to put his own name on the scoresheet as the game neared its conclusion.

Lacazette got the better of Watford defender Craig Cathcart and looked to be through on goal only to tumble to the floor.

Replays showed that his heel had been clipped but referee Craig Pawson refused to award Arsenal a spot-kick – perhaps feeling that Lacazette had fallen over too easily.

Arsenal’s win moved them into the Champions League qualification places, with the Gunners sitting one point ahead of Manchester United before the Manchester derby.

Lacazette will probably leave the club when his contract expires at the end of the 2021-22 season but he’ll hope to lead Arsenal into Europe’s elite competition for the first time since 2017.