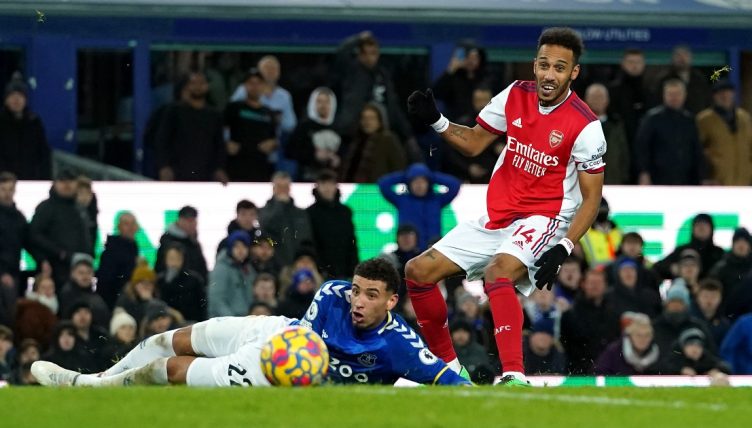 Arsenal had a Monday night to forget away to Everton, but they might have come away with a point if Pierre Emerick Aubameyang had brought his shooting boots.

Aubameyang has scored four Premier League goals for the Gunners this season, averaging one every 260 minutes on the pitch, and was left out of the starting XI by Mikel Arteta at Goodison Park.

It wasn’t a great performance from Arteta’s side, but they went into the break with a one-goal lead after Martin Odegaard scored the opener on the stroke of half-time. But the visitors looked to be living dangerously, with Everton having two goals disallowed with marginal offside VAR calls.

Arsenal didn’t heed the warning and conceded twice in the final 15 minutes, with Richarlison scoring a well-improvised header before Demarai Gray struck a superb long-range match-winner in injury time. Ex-Gunner Alex Iwobi then spurned a glorious chance to add a third on the counter for the Toffees, and he was nearly punished for his profligacy.

Aubameyang was eventually introduced in the 85th minute, replacing Alexandre Lacazette, when Arsenal needed a goal. Arteta had raised eyebrows by turning to Nuno Tavares and Eddie Nketiah first.

The Gabon international ended up with a glorious chance to equalise with the very last kick of the game. Nketiah had done well to burst forward in the dying seconds, while Gabriel showed some quick thinking to dummy it and allow it to run into Aubameyang’s path.

The striker had plenty of the goal to aim for, and took his short first time, but he sent it a good few yards wide of the post.

— Spotting Performances that need to be talked about (@PerformSpotter) December 6, 2021