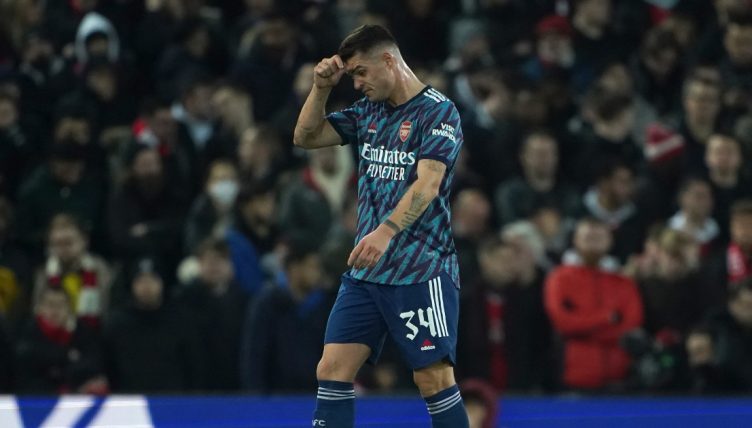 Granit Xhaka returned to Arsenal’s starting line-up for their EFL Cup semi-final against Liverpool – and was sent off inside the opening 24 minutes.

Xhaka, who joined Arsenal from Borussia Mönchengladbach in 2016, is well-known for his hot-headedness and poor disciplinary record.

But the midfielder recently admitted that he believes that he can sometimes be treated differently to his peers due to that reputation.

“When you see some tackles and imagine if I was in this position? I would be sent off straight away,” Xhaka told The Athletic in December 2021.

“This makes me do things in a different way sometimes because I know that my risk compared to the risk of other players is not the same.

“If I risk I know I am closer to a red card than any other player in the Premier League. Maybe I am wrong but that is what I feel.

“So sometimes in a game I stop myself from going for the risky ones because if I get a red card it all starts up again. I don’t want to give arguments for others to speak about me for stupid things. I try not to risk too much.”

But that all seemed to go out of the window at Anfield as he produced a rash, last-man challenge on Liverpool’s Diogo Jota and was subsequently shown a straight red card.

Xhaka will now miss the upcoming North London derby and Arsenal are already short of options in midfield, with Thomas Partey and Mohamed Elneny at the Africa Cup of Nations.

The Gunners are looking to sign Arthur on loan from Juventus but they might not be able to register him in time for the game.

No, Granit Xhaka is an idiot pic.twitter.com/wJyLuJeVen