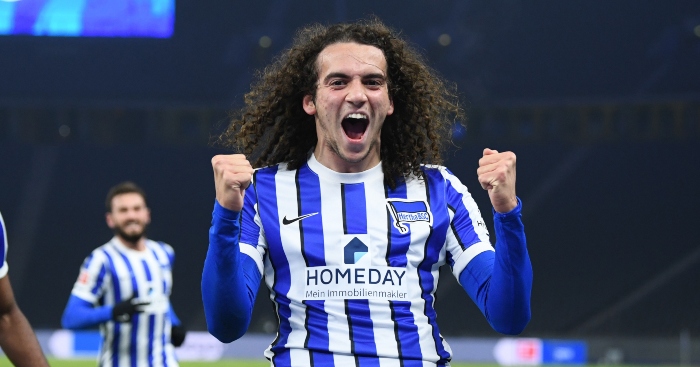 After falling down the pecking order at Arsenal, Matteo Gunedouzi has rediscovered his best form on loan at Hertha Berlin.

Guendouzi enjoyed a promising debut season with the Gunners but was frozen out by Mikel Arteta in 2019-20 due to disciplinary issues.

The 21-year-old joined Hertha Berlin on deadline day and has established himself as a first-team regular, earning plenty of plaudits in the process.

“He is very, very valuable to us,” Hertha Berlin boss Bruno Labbadia said in December 2020. “We are happy that we were able to sign him.

“He’s a very, very good footballer, who has a good sense of space and is technically very strong. Even though he’s young, he gives instructions. He doesn’t care at all that he doesn’t speak the language.”

Having opened his Bundesliga account against Borussia Monchengladbach, the midfielder netted the opener in their 3-0 win over Schalke.

He pounced on a loose ball inside the box and curled a brilliant effort past the goalkeeper in the 35th minute.

Guendouzi is back! In good form! pic.twitter.com/1ZLRjxogCP