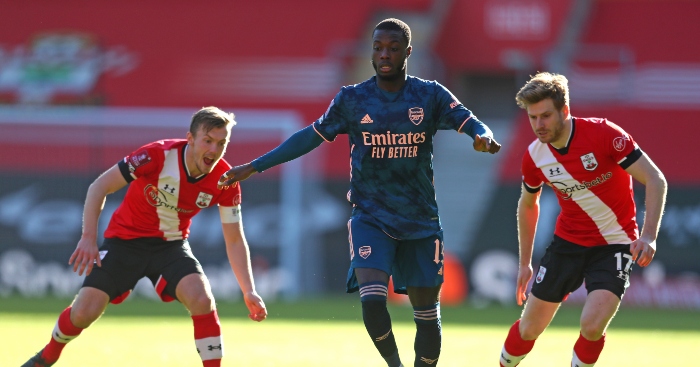 Nicolas Pepe scored the equaliser during Arsenal‘s 3-1 win over Southampton – but his true highlight of the game came when he nutmegged two players in five seconds.

Bukayo Saka put the Gunners ahead six minutes before half-time, taking one touch to round the goalkeeper before slotting the ball into an empty net.

Saka picked out Alexandre Lacazette to seal the three points, helping Arsenal leapfrog the Saints and move into the top half of the table.

During the closing stages of the game, Pepe drove forward with the ball and nutmegged two players in quick succession before winning a free-kick.

“I think the other night he had a good game, he was involved in our best attacking moments and the way he had been training he deserved his chance and today he did his job really well,” Mikel Arteta said after the game.

“He was really good again. He created big moments. He deserved his chance today and he took it.”