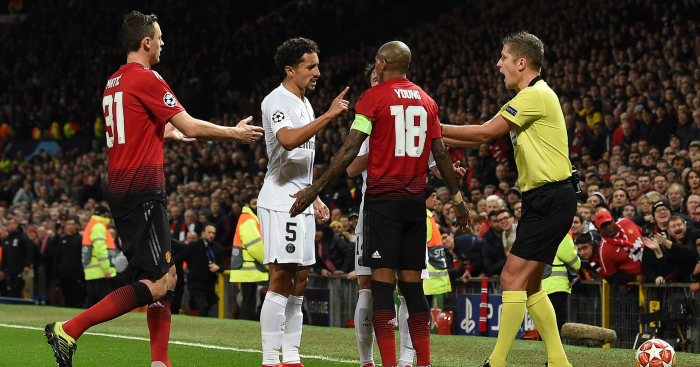 Ashley Young showed there is no love lost between him and former Manchester United flop Angel Di Maria as he sent the PSG winger crashing into the pitchside barriers with a shoulder barge at Old Trafford on Tuesday night.

Di Maria was returning to the ground where he was a massive disappointment after a big money move from Real Madrid five years ago – with a report in The Independent this week revealing how one former team-mate described the Argentine as a “complete fanny”.

The 30-year-old was booed all night by United fans, and Young took the opportunity towards the end of the first half to remind his opposite number he was not welcome with a push as the ball was rolling out of play, leaving Di Maria requiring treatment.

“[Young] was lucky,” PSG boss Thomas Tuchel said afterwards. “He knows there is a hill going down. There was no need to push him into the fence. I am happy there was no big injury.”

But Di Maria had the last laugh in the first leg of the Champions League round of 16 clash with his former club, as he provided both assists in PSG’s 2-0 win.