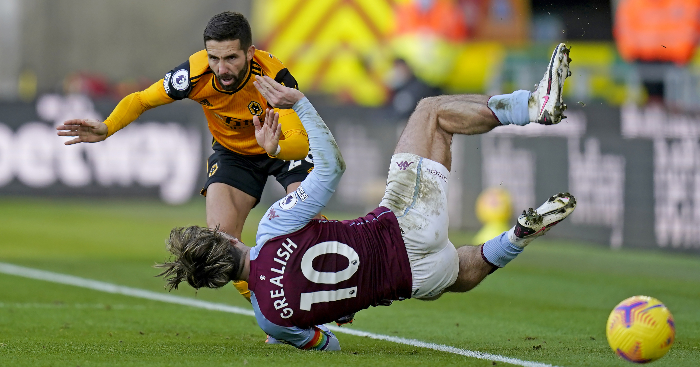 Sometimes you get a moment in football that’s captured by the perfect camera angle. The West Midlands derby between Wolves and Aston Villa produced one such moment.

There was plenty of controversy and no shortage of talking points as Villa came away from Molineux with a 1-0 win, sealed with a late injury-time penalty.

Both sides were reduced to ten men as Mike Dean dished out 12 yellow cards in total, including a milestone 3000th in his career as a referee.

Our personal highlight of the match came when Jack Grealish tried to make it past his old team-mate Adama Traore but couldn’t find a way past the Spain international’s considerable frame.

Just as Grealish fell to the floor in the foreground, as if by magic Douglas Luiz could be seen doing the same thing after a coming together with Conor Coady in the background. It’s a weirdly satisfying clip to watch on a loop.